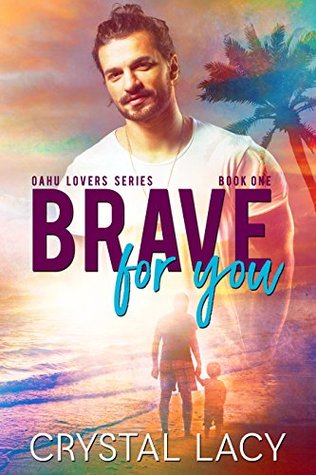 The Summary: Less than a year after moving to Hawaii, construction foreman Nate Ellison’s wife leaves him and their infant son for another man. Months into single-fatherhood, Nate meets Andrew “An” Hoang and is slowly drawn into An’s life. Through An’s friendship, he finds himself finally enjoying his new home in paradise.

An Hoang hasn’t had a real relationship in years. With his pediatrics practice and a niece to care for on his days off, he doesn’t have the headspace for more than a simple roll in the sack. But when he meets Nate—who just happens to be the gorgeous construction worker he encountered in the lobby of his apartment building—something about Nate makes it impossible for him not to care. When Nate needs An’s help with his son, An doesn’t refuse.

What happens when Nate’s past and An’s old-fashioned parents interfere just as the two men begin to fall for each other? Will they find the means to be brave and give their love a chance to flourish?

Brave for You is a story about discovering yourself, finding love and family. I started it and I actually didn’t put it down until I was finished. That’s how much I enjoyed this. I stayed in bed reading all afternoon.  The backdrop of Hawaii only served to enhance the romance between An and Nate.

Nate is a newly minted father whose wife disappeared and he never expects her to come back. An is a pediatrician who loves his niece Diah and lives three doors down from Nate. It’s a chance encounter on a rainy morning the starts to push these two men together. What really solidifies their friendship is Nate calling on An when his son is ill. They bond they form is intense and only strengthens with every weekend trip they take with each other. An and Diah are slowly showing Nate more of the island and their favorite places to go.

It is a slow burn between the two, but it’s such a good burn.

Their relationship doesn’t develop without issues though. An’s parents aren’t accepting of his homosexuality and it makes for quite a few awkward moments. It made me feel for An because he lived his entire life around what they might think about him. He never had a long term relationship, never brought anyone home to be introduced to his family.

Then Nate is still married, even though you forget about it for a while. I’m not a fan of Nate having a wife but, like I said it wasn’t something I lingered on. I kept my fingers crossed for the result that I really hoped for.

The romance scenes, Nate is learning what he likes in bed and what he enjoys giving to his partner. I liked these scenes because it wasn’t like everything just clicked and they were magical together. It was real. They communicated; they worked together and found what worked for them. It was a bit steamy in parts, which I’m all for.

I didn’t want to put this down once I started reading it, and that’s been a hard task for me lately. So the fact that Crystal Lacy held my attention and kept me wanting to flip pages, that’s a sign of an excellent book.