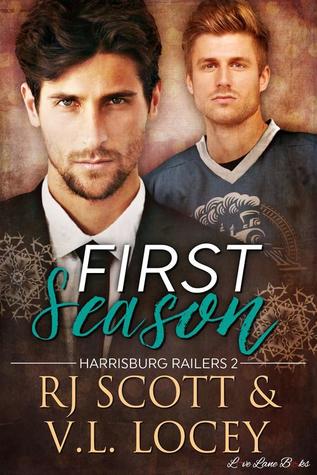 Five out of Five stars

This is book two in the Harrisburg Railers Series

Summary: Layton Foxx works hard for what he’s achieved. The condo, the career, the chance to make his mark…it’s all down to the sacrifices he’s made. With tragedy in his past, he doesn’t want or need love. Then he meets Adler Lockhart, the extroverted, sexy winger for the Harrisburg Railers, and abruptly he can’t avoid love even if he wanted to.

Adler Lockhart has had everything handed to him his whole life. Cars, villas, cash, college tuition at the finest Ivy League schools. The only thing he doesn’t have is parents who care, or the love of a good man. Then Layton walks into his privileged life and shows him what real love can be like.

In the second installment of R.J. Scott and V.L. Locey’s Harrisburg Railers, First Season, we meet Layton Foxx and Adler Lockhart. Layton Foxx is brought in by the Railers management as a form of crisis management for Ten and Mads coming out publicly. Layton and Alder’s first meeting is about as disastrous as Alder’s word vomit is. I think that’s what endeared me so much to Alder.  I can relate to losing that filter when I get nervous or unsure in a situation. He’s just as awkward as the rest of us even if he’s a pro-hockey player.

Layton is young but incredibly smart. He faces his fear of jocks and his past taking the job with the Railers and I think it really changed his opinion and helped him on his road of healing. There was something very organic about him and I found myself admiring his resolve and rooting for Adler to finally get through to him. And when they do push past work colleagues, past friendship and into a romantic relationship it felt true to the pair. Their intimacy was vivid, strong and fun. Just like Alder’s habit for saying whatever comes to mind and Layton’s gentle but wry humor.

I think Layton brought Alder a sense a family that he didn’t have as he grew up. Layton gave that to him by bringing Alder to his childhood home, trusting and sharing his heartbreaking past and at the very end, acknowledging Alder’s chosen family as that.

There was something about these two that had me one hundred percent invested in their story. R.J. Scott and V.L Locey could have written an eight hundred page novel on these two and I would have loved every second of it. The second installment of the series was a perfect addition, (I have a fear that the second book in a series can ruin everything, this totally DIDN’T) and it flowed from book one to book two and into book three (which I scored an ARC of!!!).

What also had me dancing in my seat? The fact that you saw characters from Changing Lines throughout First Season. They just weren’t written and then forgotten about. I was glad to see Mads family and so much more of STAN! I love Stan to pieces and need to read more about him!

Should you buy this? Yes, go buy it now, you’ll be glad that you did.