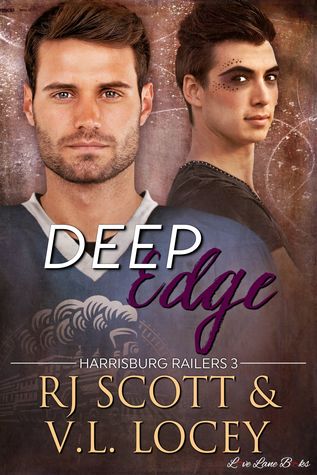 This is book three in the Harrisburg Railers Series

One man’s passion, another man’s lies. Can love fix even the darkest of hearts?

Trent Hanson is a figure skating phenom adored by millions around the world. His whole life has been dedicated to the sport he loves even when the sport – and his own family – have turned against him. From the playground to the Olympics to his parent’s living room, Trent has fought against bullies and homophobes to be the out and proud gay man he is. But the constant fighting has left Trent tired, lonely, and skittish. All those fears will have to be shelved though when he’s hired to spend the summer working with the Harrisburg Railers ice hockey team. Who would have guessed that the man fate has decided to pair him off with is Dieter Lehmann, all-around sex god and a man who seems to have everything to prove and doesn’t care who he hurts to get what he wants.

Dieter has spent too many years languishing in the minors, and a secret addiction to prescription painkillers means his career is in a downward spiral. His ex is blackmailing him, and he’s close to walking away from it all. But when he’s called up in the run for the Stanley Cup to cover injuries he has a taste of what it’s like playing in the NHL, and he realizes that a place on the Railers’ roster is what he wants more than anything. More than listening to his heart, and even more than caring for the infuriating figure skater who gets under his skin. When he crosses the line to get what he wants, he knows he has lost his way. He has to change, but is it too late for both his career and any chance he might have at love?

In the third novel of R.J Scott and V.L. Locey’s Harrisburg Railers series, Deep Edge, Dieter and Trent face-off against their demons and learn how to accept the help of others. Trent Hanson has been dealing with the betrayal of his father and trying to figure out a way to make money to save his mother’s home and his beloved ice rink. Dieter has darker demons to deal with, addiction to pain medication* and the pressure of performing well enough to extend his one year contract with the Railers.

I honestly was a bit worried about this premise. I have my own issues reading about addiction and Trent has a strong, flamboyant personality. I thought I’d skim through this and hope for book four. That was not the case. I ended up falling in love with Trent. He was unapologetically himself, and I personally needed that kind of character in my life this week. I needed someone to tell me, ‘Ashley just be YOU, everything else doesn’t matter’. Trent did that for me.

Dieter, oh boy, Dieter. He had everything under control. Until he didn’t. It made me uncomfortable seeing him under the influence like he was. Then it made me angry. And finally I wanted to fix Dieter because of the potential he had. It took the idea of losing his career, his love of hockey and losing Trent to make Dieter realize he might just need help. I appreciated the fact that he did go to rehab with the support of the team, his family and Trent. That was no doubt the greatest gift anyone could give him.

I think the mark of a great story is the fact that it can make the reader feel. The emotions I went through as I read, the fact I HAD to keep reading to the end, proves how good this series truly is.

Would I recommend this? Go buy the entire series now. You don’t have to know hockey to enjoy this. I promise. Go forth and enjoy.

*Personal experiences with addiction make it difficult for me to read or hear about drug abuse and addiction. It’s a testament to these authors that I gave this book a chance.