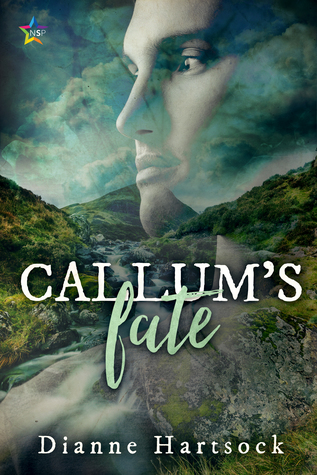 Summary: In 1780, Scotland, following a harsh year of drought, Callum Mackenzie is forced from his father’s farm in the hopes of finding work.
But as fate would have it, Callum is lured onto the moors by the will-o-the-wisp. Lost in the dark, he falls into enchantment, encountering faeries and nymphs, until he stumbles into the arms of a licentious Barrow-Wight who lays claim to his soul.
Hearing his silent pleas, Donal sends Liam the gruagach (faery) to rescue Callum and bring him to his farm, a place of refuge from the Fae. Callum is happy working on Donal’s farm, slowly falling in love with the beautiful, silver-haired gruagach. Yet there’s something wrong in the nearby forest….
Despite Donal’s warnings, Callum is lured into the forest and becomes tangled in its magic, easy prey for the Barrow-Wight. Will Liam be able to strike a deal with the Barrow-Wight to save Callum’s life, or has Callum found his last resting place instead?

After reading Callum’s Fate by Dianne Hartsock I find myself still wondering what really happened to put poor Callum in the position he landed in.

The summary led me to believe there will be a more in depth story line when it comes to the fae, the folklore and Callum’s journey, but that’s not quite what I got.  It was definitely an easy plot to follow with sex from page one until the end.

It did throw me when Callum and the Wight ended up together but I found myself fascinated and kept reading. I couldn’t help but want to know what else Callum was going to encounter. I wanted to read more about the secondary characters’ story line, Donal, Sean and their wife (Just saying I’d totally buy that book).

I did expected more of a story line than the sex scnese. That being said, I liked what I read. It was inventive and at times it felt like this could have actually been a series of dreams Callum experienced.