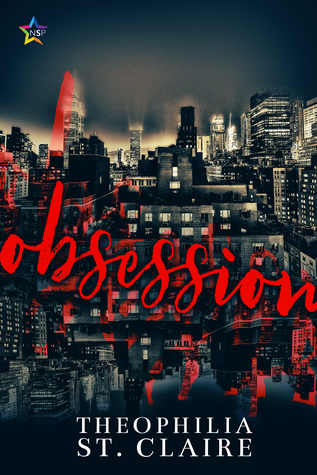 Summary: Nick has a hard life. Not only is he working at an East Harlem bar to make ends meet and pay for his sister’s medical expenses, he’s also on the run from a shady past that’s surely catching up to him.

Most people think Claude has it easy due to the money and luxury surrounding him. But they would be wrong. Firmly trapped beneath his stern father’s thumb, Claude’s pre-determined life took a nosedive when his lover, Christian, left him a year ago.

When the two meet, sparks do not instantly fly between them. Claude thinks Nick is his ex-lover returned to him. Nick thinks Claude is crazy.

However, circumstances bring these two men together. And despite Claude’s jealousy and possessive nature, Nick is falling for him. Sick of being mistaken for Claude’s ex, Nick is willing to find out what happened to him—the real Christian. He’ll have to if he wants a stable relationship with Claude. How Claude takes the truth, however, is the only thing that scares him.

Obsession is the story of Nick, Claude and the dangerous romance they find themselves immersed in. But is all the danger a physical threat or perhaps a psychological whirl wind as well. Nick works at Jen’in’s Bar for minimum wage and crappy tips in order to help pay his sister’s medical bills. Ever since his childhood, he’s faced abuse and desperation, so it isn’t new for him to face precarious situations and to take advantage of them

Claude is a wealthy, business man who sees Nick during a client meeting and believes Nick to be his ex, Christian. It becomes an obsession for Claude. He’s willing to do whatever it takes to get Nick’s attention, keep it and to have him forever.

My first thought as I read was, how could Nick entertain Claude believing him to be a different person. Then I started to understand it. Claude had everything Nick could ever want and he’s willing to please Nick in any possible way; romantically, monetarily, and sexually. Nick developing feelings for someone showering him with that much attention was completely understandable. That would be hard to walk away from.

It wasn’t until close to the end that I came to the right conclusion about “Christian” and what had happened to him. I liked how St. Claire kept me on my toes the entire time. I kept asking myself question after question. When was Claude going to lose it? How was he going to lose it? Where was Christian? Was he going to show up? Obsession kept me on the edge of my seat wanting to know what was going to happen.

It broke did break my heart, just a little bit, how everything turned out. But I feel like St. Claire did the story line justice.

Would I recommend this to other readers? Oh yes! I’m looking forward to reading more from St. Claire.

One thought on “Obsession by Theophilia St. Claire”