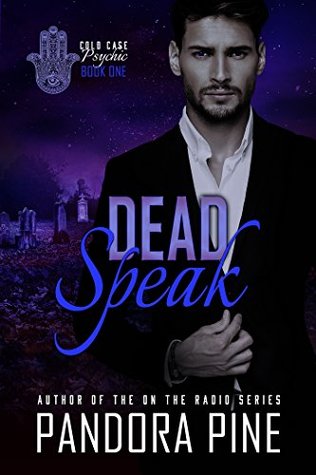 The Summary: Demoted to the cold case squad after shooting a suspect in the line of duty, Detective Ronan O’Mara knows that his career with the Boston Police Department is hanging by a thread. His first assignment is the case of Michael Frye, a five-year-old boy who has been missing for seven years. With no new leads or witnesses to interview, Ronan has to start from scratch to solve this mystery. When he sees a handsome local psychic on television, Ronan figures he’s got nothing to lose in enlisting the man’s help to find Michael.

Psychic Tennyson Grimm is riding high after helping South Shore cops find a missing child. He’s even being courted by the Reality Show Network about a program showcasing his abilities. He has no idea that his midday appointment with a customer, who instead turns out to be a police detective, is going to change the course of his life and his career.

With the blessing of the BPD, which badly needs an image make-over, Ronan is allowed to bring Tennyson in to assist with the Frye case. Being thrown together in front of cameras is never easy, but add in an emotional missing person’s investigation, a tight-lipped spirit, and a cop who’s a skeptic, and it definitely puts a strain on both men and their working relationship.

When the child’s body is found, the work to identify his killer begins. As Ronan and Tennyson get closer to solving the case, the initial attraction they feel for one another explodes into a passion neither man can contain.

Will working together to bring Michael’s killer to justice seal their fledgling bond, or will unexpected revelations in the case tear them apart forever?

Dead Speak by Pandora Pine was narrated by Michael Pauley. I’ve heard only the best about his narrations so when I got the opportunity to listen to his work, I jumped at it. He is very distinct and brings more personality to each character. Ronan was alpha male one hundred percent and it came through. There was a roughness to his chapters that fit so well. Tennyson was more delicate. His part, it was one I wasn’t the biggest fan of because he sounded overly feminine and I didn’t picture him that way. The secondary characters all have their own tones, textures and distinct Boston accents.  It brought me further into the world and over all I will look forward to listening to more of Michael Pauley’s work.

Paranormal/Mystery romances are some of my favorites. I grew up on stealing mystery novels off of my mom’s bookshelf (Entirely inappropriate for my age at the time lol). It’s been hard for me to find a M/M mystery novel or series that was able to suck me into that universe entirely. Usually there isn’t enough mystery to satisfy me.

This was an entirely different case. I was still trying to figure it out nearly all the way to the end of the book. I did get an inkling towards the end and I was right, but it took nearly the entire story for me to get there.

It was a heartbreaking case and the details weren’t glossed over. Michael Frye was a five year old boy who disappeared from his front yard. Ronan is assigned to work cold cases and he’s at a loss as to what could have happened to Michael. So he goes to Tennyson Grimm, psychic, with the hopes that maybe he’ll get some clue.

Ronan is extremely skeptical of Tennyson’s gift. He thinks it’s a crock of shit and he isn’t afraid of telling Tennyson that to his face. There were a few times I just wanted to pop Ronan over the back of the head for being such a dick. Then there were times I was all heart eyes at how he and Tennyson were together. They were just sweet. And hot. Very, very hot.

Their romance scenes, definitely not something you would want to be caught listening to while you were at work. Which is exactly where I listened to this (Because I’m that person, you all know someone like me, don’t deny it). I also drove around longer than necessary because I didn’t want to get out of my car and go into the house. I did not want to stop listening.

Give this a read if you like cop procedural and some white hot romance and drama with it.