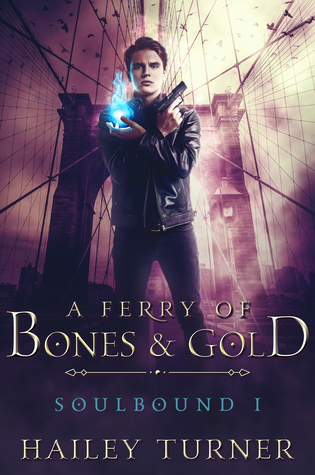 The Summary:  When the gods come calling, you don’t get to say no.

Patrick Collins is three years into a career as a special agent for the Supernatural Operations Agency when the gods come calling to collect a soul debt he owes them. An immortal has gone missing in New York City and bodies are showing up in the wake of demon-led ritual killings that Patrick recognizes all too easily from his nightmares.

Unable to walk away, Patrick finds himself once again facing off against mercenary magic users belonging to the Dominion Sect. Standing his ground alone has never been a winning option in Patrick’s experience, but it’s been years since he’s had a partner he could trust.

Looking for allies in all the wrong places, Patrick discovers the Dominion Sect’s next target is the same werewolf the Fates themselves have thrown into his path. Patrick has been inexplicably attracted to the man from their first meeting, but desire has no place in war. That doesn’t stop Patrick from wanting what he shouldn’t have. Jonothon de Vere is gorgeous, dangerous, and nothing but trouble—to the case, to the fight against every hell, and ultimately, to Patrick’s heart and soul.

In the end, all debts must be paid, and Patrick can only do what he does best—cheat death.

This is the first time I’ve read anything by Hailey Turner. Obviously, I have been missing out because I need more! Especially, in concern to Patrick and Jono. Jeez, those two fellas, I just fell in love with them.  I was enchanted with the entire world. There were Gods, mages, sorcerers, werewolves, werecreatures, seers, vampires, demons, and more.

Patrick is a red-headed, stressed out and annoyed mage who has been through hell and back. He gets sent to New York to help investigate a series of extremely violent crimes, where supernatural forces have been involved.

Jono is a werewolf from London, who bartends at a local supernatural bar. But there’s a bit more to him than everyone knows.  He is one hell of a guy. He’s very protective, strong and smart.

Both Patrick and Jono’s lives are influenced by the Gods. Patrick has a debt to pay and Jono, I have a feeling we’ll be learning more about how the Gods influence him in future books. They worked together, not just the police but the supernatural community to stop any catastrophic disaster from hitting New York City from Ethan Greene who will do whatever it takes to become a God.

I’ve been on a paranormal, procedural, romance kick. This book spoiled me rotten. Not only was there a case that needed to be solved but it all played into something much bigger than those cases.  The action of the scenes were vivid, fast paced, and had my heart pumping. I had to know what was going on with Patrick and Jono and the rest of the crew. I NEEDED TO KNOW.

The romance between Patrick and Jono wasn’t the main focus. There were a couple of intense scenes and you could feel the buzz of attraction throughout the novel.  I feel like I’m about to keyboard smash from how much I enjoyed these two men. They were both strong, honest, and willing to fight for each other. Like I said, I loved them and all the other characters.

So the question is, should you read this? OMG YES. I’m actually going to check out the other books Hailey Turner has penned. Because damn, this book was good.