Neil Josten is the newest addition to the Palmetto State University Exy team. He’s short, he’s fast, he’s got a ton of potential—and he’s the runaway son of the murderous crime lord known as The Butcher.

Signing a contract with the PSU Foxes is the last thing a guy like Neil should do. The team is high profile and he doesn’t need sports crews broadcasting pictures of his face around the nation. His lies will hold up only so long under this kind of scrutiny and the truth will get him killed.

But Neil’s not the only one with secrets on the team. One of Neil’s new teammates is a friend from his old life, and Neil can’t walk away from him a second time. Neil has survived the last eight years by running. Maybe he’s finally found someone and something worth fighting for.

If you haven’t read this series, and you’re a fan of sports, college-aged, organized crime, then you’ll probably want to grab a copy. I had avoided reading this because I was afraid that it wouldn’t live up to the hype. So many people fell in love with this series, I didn’t want to be the person who didn’t. I read this in four hours, then proceeded to buy the next two books in the series so I could read those too and figure out what the heck was going to happen. I have some mixed feelings about this series.

Neil has lived his life on the run. He gave himself one thing to enjoy, Exy. Exy is a combination of hockey and lacrosse. He plays well and enjoys the sport. When he’s scouted to play in college, even if it’s for the PSU Foxes, he isn’t sure if he should say yes or no. He has a history with the star player, Kevin, even if Kevin doesn’t recognize him.

Throughout the summer and the beginning of the fall semester, there are a lot of growing pains for the Foxes. Trust doesn’t come easily, for any of the players. They all have their trauma and their ways of coping. Neil definitely didn’t know what he was getting into accepting the scholarship.

This is a character driven story and there isn’t any romance in this book. The entire book is setting you up for a big reveal and it leaves you on a cliffhanger. I had a fondness for Andrew, I don’t know why, but I did. He and Neil, had this chemistry even when they detested each other in the beginning.

I’m hoping that in the next installment I’m able to connect a little more with the characters and I get some answers! 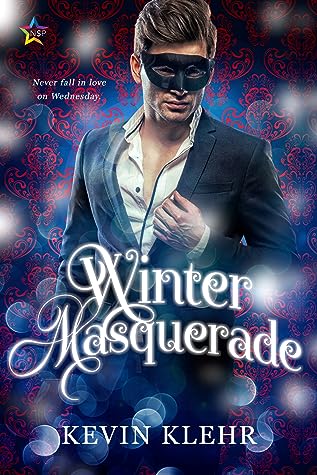 Ferris wakes on the Sea Queen, an enchanted cruise ship sailing on a chocolate sea. He has no idea how he got here, but he desperately wants to go home to his boyfriend.

The alchemist is the only person who can help Ferris, but he’s been kidnapped. The ransom is high tea with scones and jam.

Meanwhile, the passengers are gearing up for the Winter Masquerade, a ball where love and magic reign.

With a murderous musician, an absent boyfriend, and a mystical party, Ferris soon learns that Wednesday is not the day to fall in love.

The first thing I have to say about Winter Masquerade is the fact that it is entirely unique. I finished reading it a couple of days ago but I needed time to digest and analyze my thoughts about this story. There are so many layers and within its pages and it deserved the time. I’ve seen several people refer to it as absurdist fiction, but I don’t have any true experience with it. So I’m going to review it as what it meant to me while reading it.

Ferris wakes up in a world that doesn’t make sense. The sea is made of chocolate and there are characters with outlandish names (Miss Represent, Miss Calculation) that keep talking circles around him. He wants to find his way home. But to get there, he has to learn who he is and what he wants for himself.

I picked up quickly what was happening or happened to Ferris in real life that put him on board the Sea Queen. It was interesting that interspersed between the vivid, colorful characters, there were characters like Cole who served as a grounding factor for Ferris. He was able to see the type of person, the type of relationship he wanted. If it was possible to have that in this crazy world, then he could have it in real life.

I felt Ferris blossom and become the person he wanted to be. I, so very much, enjoyed seeing Ferris become Ferris. The Sea Queen and it’s permanent residents, taught him the importance of a support system. No matter how wacky that system may seem.

Give this one a read, it was one of the more memorable books I’ve had the pleasure of reading in the past few months. AND! I absolutely agree that Wednesdays bring nothing but trouble.

Read the tags for an idea of what Ferris was dealing with.