Andrew Madigan had everything he ever wanted.

He’d worked hard to build this perfect little life. A stable relationship with a successful man. A beautiful home in a quiet suburb. And best of all, a job where he spent his days talking about literature.

Then his tenure was denied and, too quickly for him to stop it, everything crumbled.

Now, with his dreams in the dust and his confidence shattered, Andrew has one summer to figure out his next move.

Bulbs, Florida, is like no place Andrew’s ever known. It’s small and provincial. It’s hot as hell. Storms roll through every single day. But Andrew just has to keep his head down. Finish his book, find a new job, put things back on track. Easy-peasy.

He didn’t plan on making a friend.

Coley Brandt has a green thumb and an easy smile. He’s much younger than Andrew, but he puts Andrew at ease, makes him feel at home. Their time together reminds Andrew what having a purpose feels like.

But Coley has dreams of his own, and they’re a million miles away from the life Andrew’s trying to get back.

Maybe this is just a summer fling. Maybe, like the lightning, it’s only meant to be glorious for a moment before it disappears.

Or maybe it’s something more.

I don’t know what it was about this book, but it was the most satisfying read. It had an ebb and flow that made Andrew and Coley’s store easy to get lost in. I could see the cottage, the pond, and hear the shrill of crickets and frogs at night. Beaudoin brought the story to life and invited us into a rich, hot, Floridian world.

Andrew lost everything that made him who he was. His job, his partner, his home. Florida was a means to recharge and get back on track with his writing. Finding a job would be nice too. He didn’t expect to find Coley.

Their first encounter with each other isn’t the greatest. There may have been tears, but Coley was surprising. He may have been younger, but there was a sense of maturity in him. He was kind and didn’t judge Andrew for not knowing where he was going to end up past his time in the cottage. He slowly pulled Andrew out of his shell. Andrew helped with the yard work, took a swim in the pound, and went out with Coley.

Andrew and Coley together was *chef’s kiss* spectacular. There was a chemistry that steadily grew from their first meeting. Uh, and those kisses? Can I get more of those? There was something about reminded me of my special somebody. I’d give this a three out of five on the spice scale.

My heart hurt for Andrew at times. Then there were times I was rooting for Andrew to stay in Florida. He found his happy while he was there. He slowly learned who he was outside of his career. Coley helped him get there.

I loved that both Andrew and Coley encouraged each other to go for opportunities they may not have gone after on their own. How comfortable they became with each other. I laughed at Andrew shuffling through the kitchen naked. Coley and his red pick up truck coming to shake up Andrew’s world.

Four out of Fives Stars

Megan Harris had hopes of seeing the world, but at twenty-five she’s never even left Florida. Now a wedding invitation lures her to Quebec…in February. When her ex-friend Scarlett offers to be her plus-one (yeah, that’s a whole story) and suggests they turn the journey into an epic road trip, Megan reluctantly agrees to the biggest adventure of her life.

A week together in a car is a surefire way to kill a crush, and Scarlett Andrews has had a big one on Megan for years. The important thing is fixing their friendship.

As the miles roll away, what starts as harmless road-trip games and rest-stop dares escalates into something like intimacy. And when a surprise snowstorm forces Megan and Scarlett to hunker down without the open road as distraction, they’ve got a bigger challenge than making it to the church on time: facing the true nature of their feelings for each other.

Megan and Scarlett used to be great friends, now? Not so much. Megan felt left behind as Scarlett moved from Florida for college and life. When Juliet invites them to her wedding in Quebec, they reluctantly agree to road trip their way from Florida to Quebec.

Megan packs her scrap book and polaroid camera, hesitantly ready to see what she’s been missing out on. Even with ground rules, Scarlett manages to surprise Megan with her thoughtfulness in planning stops that Megan might enjoy.

I liked that we eventually got to find out what split Megan and Scarlett apart and upon learning those reasons, they were able to address it and move forward in their budding relationship. They both complimented, and challenged each other. Their chemistry and attraction to each other grew with each stop they made and I loved it.

Their romance was a slow burn that grew in intensity. There were a few moments that had me fanning myself lol. I was a little surprised by the boldness of Scarlett at first, but then I can’t see Scarlett being any other way but bold, even in the bedroom.

END_OF_DOCUMENT_TOKEN_TO_BE_REPLACED 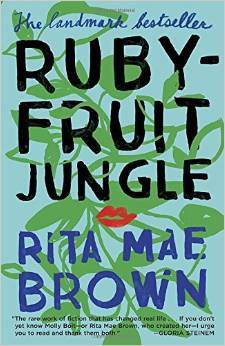 The Summary: A landmark coming-of-age novel that launched the career of one of this country’s most distinctive voices, Rubyfruit Jungle remains a transformative work more than forty years after its original publication. In bawdy, moving prose, Rita Mae Brown tells the story of Molly Bolt, the adoptive daughter of a dirt-poor Southern couple who boldly forges her own path in America. With her startling beauty and crackling wit, Molly finds that women are drawn to her wherever she goes—and she refuses to apologize for loving them back. This literary milestone continues to resonate with its message about being true to yourself and, against the odds, living happily ever after.

Rubyfruit Jungle is a book one of my graduate studies professors recommended to me for a term project in comparison of a classical vs. contemporary work. I hadn’t ever heard of this book and out of all the choices, this sounded like the least torturous option out of them all. I actually read it over the weekend and enjoyed the story, although I don’t see it in the amazing light that so many other people have. And I’m not going to review it in a literary way because I already have to do that for class.

Molly Bolt is most definitely gay. I figured that out very quickly when she decided to make money off of getting her cousin to show other students his penis. She didn’t care at all as to what he was packing. I think that was the best part of this book, even if it through me way off, I was cracking up laughing at how methodical she was at getting her money.

We get to watch Molly as she grows up in the south and how each experience she has in different times of her life impact who she ultimately becomes. First we meet Molly in elementary school. Middle school is when she first kisses a girl and falls in a younger version of love. Then, in high school she has sex with her ‘cousin’, who really isn’t her biological cousin but a male sexual partner.

I really started to enjoy this book once Molly went to college. She finds love in a sorority sister and once they are discovered, there goes their college careers. This was the relationship that I was most invested in. They were friends first, sarcastic, witty, and jerks to each other kind of friends. The pair felt real compared to the rest of Molly’s love interest. I think perhaps because of how everything played out. I felt for them.

No matter the trouble Molly found herself in, she never gave up. She was still sassy and one hundred percent herself. She didn’t make any apologies for being a lesbian, enjoying living a much different lifestyle than she did where she grew up. She fought for what she wanted and I admired that about her.

Now, do I recommend this to every person who is coming out the closet? Eh, probably not. It was a good read and I can see the literary value in it. The boundaries were pushed upon its first publication in the early seventies. It could be seen as quite racy in several sections. I do think if you are into literary fiction this is a great read for you to pick up and try out.