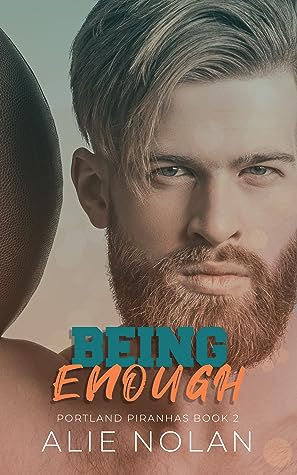 Ryan has been living a lie his entire life in fear of losing his NFL career, because of who he is behind the lie. Football is all he’s ever wanted, the thing he loves most in the world—until he meets a gorgeous man in a bar, with bleached-blond hair, a sexy British accent, and a Piranhas hat, who changes everything.

Alec doesn’t understand American football—why would he? The cute stranger in the bar doesn’t need to know that though. What starts as a simple white lie about his favorite NFL player, turns into so much more.

Living in a new city, thousands of miles from his home town, the last thing Alec expects is to be swept up into a secret romance with one of the Portland Piranhas’ biggest stars, but is falling in love enough for Ryan to risk losing his career by coming out? Is it enough for Alec to go back in the closet until Ryan retires?

His Favorite Player was a quick, fun, and low-angst football romance. Ryan and Alec has instantaneous chemistry and a connection that built as time passed.

I love the trope, a celebrity falling for someone who has no idea who they are. There’s an appeal, for someone famous to find someone that makes them feel normal, and loved, and more than what they are famous for. It just tickled me that he lied that Ryan was his favorite player, with no clue he was talking to Ryan. He and Ryan are so happy together. There were times that had me grinning as I read scenes with them together.

They were such a fun couple, foodfight and all.

The *cough* romance *cough* scenes were plentiful. If you’re looking for more of that than a drawn out romance, this will hit all your buttons. I just wanted there to be more.

One scene that stuck with me, and will stick with me for a long time, is when Ryan’s father met Alec. I could sit here and tell you all about it, but I think it’s best experienced by reading it yourself. It was organic, honest, and touching.

On to book two!