Wilder Girls meets The Craft in this Sapphic horror debut that asks: what price would you be willing to pay to achieve your deepest desires?

Finch Chamberlin is the newest transfer student to the ultra-competitive Ulalume Academy… but she’s also not what she seems. Months before school started, Finch and her parents got into an accident that should have left her dead at the bottom of the river. But something monstrous, and ancient, and terrifying, wouldn’t let her drown. Finch doesn’t know why she woke up after her heart stopped, but since dying she’s felt a constant pull from the school and the surrounding town of Rainwater, like something on the island is calling to her.

Selena St. Clair sees right through Finch, and she knows something is seriously wrong with her. But despite Selena’s suspicion, she feels drawn to Finch and has a sinking feeling that from now on the two will be inexplicably linked to one another.

One night Finch, Selena, and her friends accidentally summon a carnivorous creature of immense power in the depths of the school. It promises to grant every desire the girls have kept locked away in their insecure hearts—beauty, power, adoration—in exchange for a price: human body parts. But as the cost of their wanting becomes more deadly, Finch and Selena must learn to work together to stop the horror they unleashed, before it consumes the entire island.

I don’t know if I was in a darker headspace or what, but I LOVED this book. I was very suspicious about the fact that it was branded as Wilder Girls meets The Craft. Which was an entirely accurate description. This is a YA sapphic horror, and there are some intensely dark moments.

Finch Chamberlin experiences an unthinkable tragedy the day she additions for a position at the Ulalume Academy. She isn’t sure why she didn’t drown with her parents, but she knows it wasn’t natural. Whatever is calling her to Ulalume Academy, it feels like it needs her to be there.

Selena St. Clair, the stereotypical popular girl, and her friends accidentally summon the creature that sends them spiraling on their dark journey.

Selena was the most surprising character out of everyone. I thought I was going to HATE her with a fiery passion, but I really ended up liking her.

There were a lot of elements that seemed to draw me deeper into the world of Ulalume. The imagery was vivid and rich. The dialogue flowed well (and it was clear the author wasn’t trying to sound ‘young’). I felt like I was in Rainwater, Maine on the ride with Finch and Selena.

The cyclical nature of Nerosi, Finch, and Selena discovering what happened in the past, understanding the echoes and then their lightbulb moments. There was a sick part of me that wanted to know how far these girls would go to get what they wanted, but at the same time, I was pleading with them to stop.

This is the first book this year that I had fun reading and I’m definitely going to keep an eye out for Kayla Cottingham’s work in the future.

The only interesting thing about fourteen-year-old Jena is other people. Her mother disappeared when she was a baby, and her best (and only) friend, Sisi, is not just the lost heir to a noble Numbered house, but also the Kingdom’s most famous beauty. Jena herself is just awkward, anxious, and often alone: not exactly heroic material. But when a letter summons Sisi to the royal court, both girls find their own futures, and the Kingdom’s, in Jena’s hands. Sisi, caught between the king and the crown prince, searches for a magical secret the Prince is willing to kill to keep. Jena can save her: but only if she is willing to let her go, maybe forever. It’s hard to do that when she’s in love with Sisi herself.

I have mixed feelings about Queen of All.

I was extremely excited to see a YA LGBTQ+ novel. Add the fact that it was branded as F/F and a fantasy world I was all about it. One of the main issues I had, was the main conflict was a little meh. There was so much build-up but by the end of the book, I was left wondering if I had missed something. What happened with the prince? Was Jena more than meets the eye like I thought she was going to be? I felt a bit lost.

Sisi and Jena are tight friends. So much so, that once Sisi is summoned to the royal court due to her rumored beauty, Jena goes with her. They take on the royal court and work together to ensure they are safe.

What I liked was Jena. She took the opportunity to read and learn as much as she could. She used her plain appearance to venture around the castle unnoticed. But I feel like she got pushed into the traditional role of supporting character who is the fat best friend. Nothing irritates me more. I had so many hopes for her and was let down.

There were few LGBTQ+ elements in this. Jena does admit to herself that she has feelings for another girl, but again, her happiness here gets sacrificed.

This was just a huge miss for me. Other readers absolutely adored this novel. Check out the reviews on Goodreads, they raved about it. It just didn’t work out for me. 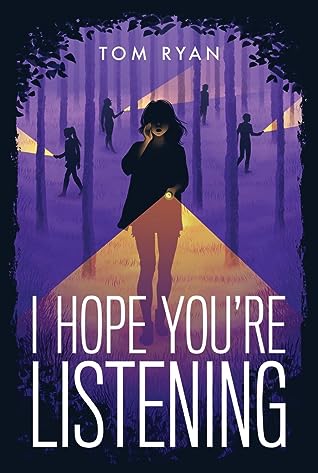 EVERY MISSING PERSON HAS A STORY.

In her small town, seventeen-year-old Delia “Dee” Skinner is known as the girl who wasn’t taken. Ten years ago she witnessed the abduction of her best friend, Sibby. And though she told the police everything she remembered, it wasn’t enough. Sibby was never seen again.

At night, Dee deals with her guilt by becoming someone else: the Seeker, the voice behind the popular true crime podcast Radio Silent, which features missing persons cases and works with online sleuths to solve them. Nobody knows Dee’s the Seeker, and she plans to keep it that way.

When another little girl in town goes missing, and the case is linked to Sibby’s disappearance, Dee has a chance to get answers with the help of her virtual detectives and the intriguing new girl at school. But how much of her own story is she willing to reveal in order to uncover the truth?

Dee Skinner’s life changed the moment she witnessed her best friend getting abducted at seven years old. Ten years later, she still lives in the same town, but in a different house. Sibby is a ghost that haunts Dee every day. She’s the girl who wasn’t taken. That guilt weighs her every action down.

She wasn’t able to help Sibby, but she finds a way to help others who have gone missing. As an anonymous podcaster, the Seeker, she hosts a true-crime podcast called Radio Silent. She focuses on missing person cases and works with the Laptop Detective Agency to find new leads and to find the missing.

Nearly ten years to the day, another girl goes missing in her town.

Dee struggles, wanting to stay away from the case but at the same time wanting to help find the missing girl. Is Sibby’s abduction related to Layla’s? A well-timed e-mail sends her down the rabbit hole to find out what has happened to both girls.

What I loved about the format of this novel, was the fact that the podcast scripts were included. I’m a huge true crime junkie and podcast lover. Being able to see how Dee worked to keep herself anonymous but she worked hard to help get answers from these families was exciting. She was determined to find answers and finally put in the work that her Laptop Detective Agency had been doing since episode one.

Dee meets Sarah, the attraction is immediate, but they balance each other. Where Dee is headstrong and throws caution to the wind, Sarah talks her off the ledge and finds a way to make sure they are safe from harm. Their romance takes a backseat to the plot, but the relationship was normalized in a way I wished my high school years could have been. She and Sarah got to go to the Winter Formal together, her parents didn’t make her sexuality seem anything but normal.

The action was a bit slow in the beginning, but once it got going? I couldn’t put the book down. I needed to find Sibby and Layla. I needed to make sure Burke was going to be okay by the end of it all. I had an inkling of who took Sibby, but the result for Layla? I wasn’t expecting that at all.