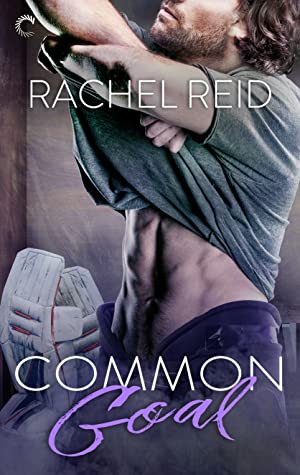 Veteran goaltender Eric Bennett has faced down some of the toughest shooters on the ice, but nothing prepared him for his latest challenge—life after hockey. It’s time to make some big changes, starting with finally dating men for the first time.

Graduate student Kyle Swift moved to New York nursing a broken heart. He’d sworn to find someone his own age to crush on (for once). Until he meets a gorgeous, distinguished silver fox hockey player. Despite their intense physical attraction, Kyle has no intention of getting emotionally involved. He’ll teach Eric a few tricks, have some mutually consensual fun, then walk away.

Eric is more than happy to learn anything Kyle brings to the table. And Kyle never expected their friends-with-benefits arrangement to leave him wanting more. Happily-ever-after might be staring them in the face, but it won’t happen if they’re too stubborn to come clean about their feelings.

Everything they both want is within reach… They just have to be brave enough to grab it.

First, ya’ll I apologize. I’m in a strict hockey headspace because the Stanley Cup and HOCKEY IS BACK!!

That being said, this cover, uh, yes please, thank you. I need all the gorgeous goalie covers in my life. I have a soft spot for goalies and their quirks. Like, the goalie head-bumps at the end of the game? I LIVE for those moments.

Eric, veteran goalie, recently divorced and he is exploring his bisexuality for the first time. He’s seen several other players find the type of love he didn’t think he could have and he’s finally found someone who he wants to experience these moments with.

Kyle is getting over his long time crush and offers his expertise to Eric. As he and Eric end up in each other’s lives more often than not, it would be hard not to form a friendship. That relationship steadily develops the more time they spend with each other.

What I absolutely loved? Eric, just one hundred percent Eric. He had a kinship with the goalie posts and it reminded me of all the moments I caught of a goalie tapping their goal posts after a save, or pregame as they’re getting into the zone. There was more to him than being a professional hockey player. He has a love for art that he wants to share with people (which just so happens to be Kyle). I enjoyed the party scene where he and Kyle were off on their own connecting with each other. Even in a house full of hockey players, it still felt intimate.

Kyle,  oh I felt for him. I just wanted to give him all the hugs. Like I know what it feels like to be in those shoes, crushing hard on someone only to find out they’ll never return those feelings. I just wished he would have had more faith in Eric instead of being stuck on the age difference.

They were such a great pairing though. Their chemistry as both friends and lovers was off the charts. They communicated, tried new things and enjoyed themselves when they were together.

I have so much love for this series! If you are a hockey fan, give these a read because they don’t let you down At all.