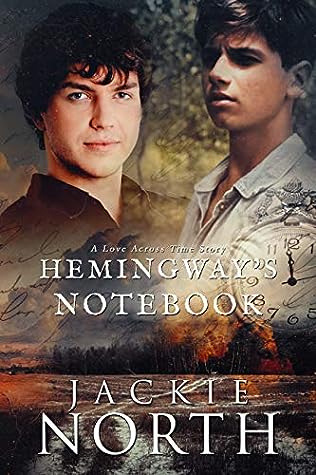 In present day, Jake, lonely and cut off from his parents, travels to the Chamberlin Inn in Cody, Wyoming to work on extra credit for his college seminar.

In 1932, Sebby labors at the Chamberlin Inn for pennies a day, wishing with all his heart for a better life.

While taking photographs in the room where Ernest Hemingway once stayed, Jake is flung back in time to the year 1932. There he meets Sebby who is living on the edge, half starving, a victim of the Great Depression. He’s been dodging rent collectors, getting behind on doctor’s bills, trying to care for his ailing Pop.

Sebby falls hard for Jake with his movie star smile, but knows something is different about him. Jake wears strange clothes, talks too fast, and doesn’t look like he’s gone hungry a day in his whole life. He’s also the handsomest boy Sebby has ever seen.

Jake is drawn to Sebby’s dark eyes, shy smile, and gentle heart. Sebby is like nobody Jake has ever met. And though the year 1932 scares him to his very core, he needs to decide. Go home? Or stay and weather the Depression with Sebby, whom he has grown to love.

I absolutely love this series, that is no secret. The covers are gorgeous, the characters feel real, and the history is accurate. These are books I rec out to everyone. Saying that, this book hit me in a different way. It could be I’m currently studying Hemingway in one of my classes, or I spent a lot of time in my undergrad years studying this time period. But this one officially takes my number one spot in the Love Across Time Series. Sebby and Jake are just, they’re everything!

Sebby and Pop are living life the best they can during the Great Depression. They’re barely making it, but they do the best that they can without heat, hot water, or enough food. Jake’s trying to get through his college program, but ends up in in 1932 Cody, Wyoming.

Sebby’s so sweet and innocent, which makes his attraction to Jake that much sweeter. Jake, he wants to do all that he can for Sebby and Pop. He cared so much for the people he had just met, it was hard to find fault in him.

The attraction between Sebby and Jake was perfect *sigh*. Sebby’s unintentional flirting had me smirking while reading. I like that this was kept, low level heat. I mean, there were still intimate moments between them. Both Sebby and Jake had so much to learn about themselves and each other, that I could picture a follow up short story showing us how Colorado turned out for them.

This was a definite one-click read for me and I’m so glad that I read it.