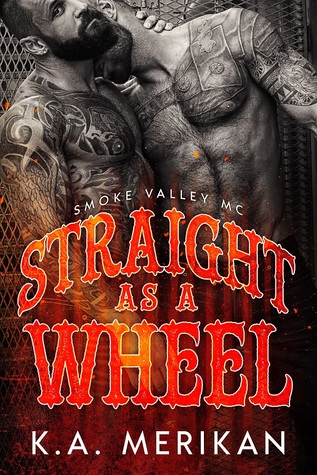 “Your secret’s safe with me, Leo Heller. Whatever happens here, nobody will know. Ever. Do you understand?”

Zolt knows what he wants from life–cold hard cash so that he can enjoy an early retirement in the Carribean as rent boys serve him drinks on the beach. Meanwhile, he’s got his pawn shop as a front for illegal operations, and a baseball bat to deal with troublemakers.

When it comes to men, Zolt loves the chase, and his favorite, most elusive prey is curious straight guys. He goes out of his way to seduce and devour them. If he can be their first, all the better.

His next mark? A biker. And not just any. An outlaw, Leo Heller.

Leo’s got his future all figured out. A wife, two to four kids, maybe a dog. If love was as easy as others make it seem, Leo would have been married already.

A string of failed relationships leads him to the one person he shouldn’t be crushing on, shouldn’t be admiring, and most definitely shouldn’t be touching. Because a man like Zolt Andorai won’t give Leo the family he wants. Hell, Zolt doesn’t even do boyfriends. But what Zolt does offer is no-strings-attached experimentation, and Leo is only human.

After all, if no one ever finds out Leo’s secret, it’s as if it doesn’t exist.

One kiss leads to another, lines blur, and before Leo knows it, he’s in over his head.

First, I’m going to talk about Wyatt Baker, the narrator. This is the first audiobook I’ve listened to that he has narrated and he’s now on my list of must listen narrators. He has a very masculine, authoritative voice that fits the characters in the Sex & Mayhem series. He kept me in the story with the characters and in the action. He was a believable narrator for such a gritty, violent story. Baker brought Leo to life and made me love Leo.

On to the story!

This one I was hesitant about reading, mainly because of Zolt’s character, but I ended up liking him as the book went on. Leo, I loved him. No matter how angry he got, I still wanted, no needed, things to work out in his favor.

Zolt loves the hunt of hooking up with men who are straight, but curious. Leo, is a hopeless romantic, wrapped up in the shape of a biker. The Smoke Valley MC has to hide some merch and Zolt’s pawn shop is the perfect place for it to be stored. The only catch? They need one of their men watching the product. Leo volunteers, and he sure didn’t know what he was in for when he agree to live at Zolt’s until enough time has passed and they can bring the product back to Smoke Valley MC land.

Leo, I had so much secondhand embarrassment for him in the beginning of his story, I knew he was bound to have something amazing happen. The chemistry between he and Zolt was palpable, hot, and perfectly drawn out. Some of the scenes between he and Zolt, well, I couldn’t keep listening to it at work like I had been doing.

I liked that Leo and Zolt’s relationship was as complicated as the situation that they were put in. It wasn’t easy and they both had a lot of reflecting to do about what they wanted in life.

The grit of this story was excellent. I could see the fights, the conflict playing out in front of me. It was a little bit of everything that I didn’t know I needed in my life.

If you’re looking for something to spice up your TBR list, grab this series up when you can. It’s an exciting read.

One thought on “Straight as a Wheel by K.A. Merikan, Narrated by Wyatt Baker”