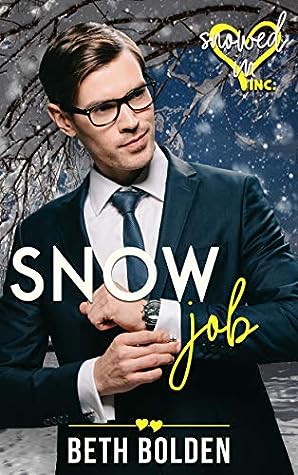 There’s nobody Micah hates more than his ex-stepbrother, Jake. And nobody he wants quite as desperately. For nine long years, Micah has begrudgingly tried to move on. How could they ever be together when Jake never spends more than a handful of days in the same country, and never more than one night with the same person?

When his job sends Micah to a remote mountain cabin on snowy Mount Hood, a misunderstanding strands Jake there at the same time. Was it actually coincidence or in fact premeditated? Either way, Micah will need to put his resentment—and his longing—aside for long enough to survive the elements that might be conspiring to kill them.

As the snow levels rise, and their situation grows more dire, Micah and Jake might finally be forced to use the heat between them to survive.

**Snow Job is a full length novel and book 5 of the Snowed In Valentine’s Inc. series. It can be read as a standalone**

A slightly taboo read, (ex-step brothers), so if you are not into that STOP HERE!

Repressing his feelings for his stepbrother (currently ex-stepbrother) has caused Micah a lot more trouble than he ever imagined it was. Their parent’s scheme to get them to address the trouble in their relationship, by sending them to the same cabin to assess its value for the company they run. None of them could foresee the snowstorm trapping them together without electricity, food, or you know, blankets.

They anger and frustration between Micah and Jake is palpable from the first. I found some of the things they did to each other, petty revenge/practical jokes, were hilarious and I’m glad that the author included those bits of their story rather than only referencing them.

The passion between them, well, *fans self* it’s been simmering for a while. It was bound to be a bit explosive.

What I truly liked, was they went back to their lives and dealt with the aftermath of their passions before their story ended. Like my heart hurt so much for Micah once he got out of that cabin. He was happy, there were so many possibilities, and then there wasn’t. Jake, bless it, he pulled at my heartstrings too.

It was easy to get lost in the cabin and in their story.

Give it a try!