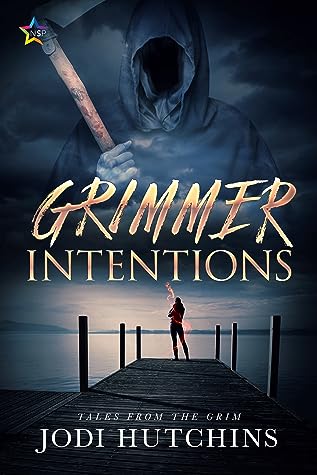 Summary: She screwed up. She broke protocol. She saved a life. Grim Reaper Margo Petrov may have resurrected a drowned surfer on the brink of death, but she isn’t earning any awards or receiving employee of the month from Corporate; she’s under more scrutiny from the Grim governing body than ever before. Since she has a massive secret that could spell disaster if revealed, she sure as hell doesn’t want to be in the spotlight, in any form.

Margo vows to keep her head down and stay out of trouble, reaping her quota of spirits lest she cause more problems for herself and the woman she saved with an illegal blood bond. She certainly shouldn’t be opening doors to the Fae lands or offering her neck to an Empusa woman suffering from bloodlust, but Margo’s laundry list of bad decisions keeps growing. With the threat of becoming decommissioned by Corporate looming in her periphery, Margo stumbles deeper into the politics of her people and soon realizes their intentions are far worse than she initially thought.

First things first, I friggin’ love Margo and if you haven’t read the first book in the Tales from the Grim series, Grim Assistant, then this review is going to spoil the heck out of it for you. Go read the first book and then read the this one. If you enjoy sarcastic, genuine characters and need a fresh take on Grim Reapers, this series is for you.

After reading the Grim Assistant I e-mailed Jodi Hutchins and shared my love for Margo. Finding out that she was getting her own book was beyond exciting. I needed to know how she came to be a Grim and what her life was like before she got to this point. I needed more Margo in my life, because I feel like she’s my spirit-Grim. AND THAT’S EXACTLY WHAT I GOT!!

What I enjoyed about this book was the more intensive background that was given on how a person becomes a Grim, what each of their roles were, the different supernatural beings (Empusa, Djinn, Fae, Grim … ), and how they all interact with each other. There was a much fuller picture of that world and the politics that comes with being a Grim and dealing with Corporate. I was able to see why Margo was so closed off, why she hides behind her knife sharp wit.

Margo’s got a soft side to her, especially when it comes to Jackie. Surprisingly, they get along with each other well. The two kind of misinterpreted each other when the first met each other and it carried over because they’re STUBBORN. But once they spend more time around each other, Jackie sees how kind Margo is when she works, they click and balance each other out. Both Margo and Jackie learn to trust the people in their lives with information they thought they couldn’t.

There was something about this book that just reeled me in and I wanted to stay with Margo. It’s not often I could say that the second book in a series is better than the first, but I feel like this surpassed the first novel. Now I’m ready for the next book!