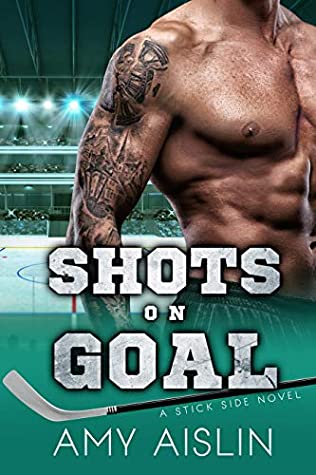 The Summary: Recently traded to the newly formed Vermont Trailblazers, professional hockey player Roman Kinsey needs to focus on helping the team win games and filling the stands, not on the blond, bespectacled part-timer who works at the library he volunteers at. He knows all too well that outing himself equals heartache and ridicule…or worse.

Cody Evans, psych major and grad school hopeful, notices everything and thinks too much. But he doesn’t know what to think when he sees Roman reading to kids. The rugged hockey player just doesn’t look like the type. But it stirs something in him, something he’s never felt before.

When the library is threatened with closure, Cody enlists Roman’s help. As they get to know each other better…much, much better…they realize that they have more in common than books. But Roman’s keeping a big part of himself from his team, and giving in to his feelings for Cody might be more than he’s willing to risk.

I’ve been in a bit of a reading slump lately. Everything I picked up I just put down and gave up on. This book, Shots on Goal, pulled me out of a severe reading slump and reminded me why I love to read, especially around the holiday season.

I read this in one sitting (well I stayed up late and went to work sleep deprived). Roman and Cody were everything I need as a pick me up.

Roman Kinsey has just been traded to the Vermont Trailblazers and he’s trying to change. He wants to become more active with the team, be it through charity events, community outreach and getting to know his teammates. Roman is a character has been through some rough times and because of it, he’s been closed off.

There were so many times I wanted to jump through the pages of this book to give Roman a hug, and to let him know it was going to be okay. There were times that my heart just hurt for him. But, Roman kind of reminded me of myself. It’s hard to break out of the habits that are so ingrained, that stepping out and doing things like hanging out with teammates, volunteering to help save a local library (thanks Cody!), it’s all a bit overwhelming but he really showed his strength. I looooooved that he baked and cooked his way into his teammates hearts. Like, who does that? Roman Kinsey, that’s who!

Cody Evans, that fella is a handful, in all the best ways. He challenged Roman, reminded him that it’s okay to want certain things, and to be yourself.

Roman and Cody were just so sweet together. Well, a combination of burning chemistry, sweetness, and oh boy *fans self* heat. There was just the right amount of flirty scenes that I felt like they were going to develop into a long-term relationship.

This is another hockey m/m romance that will be in my reread list when I need a pick-me-up and a little extra happy to get through it.