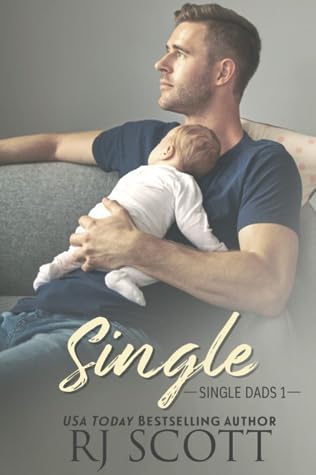 The Summary: Reeling from the painful rejection of a man he thought he loved, Asher is left holding the baby.

Ash wants a family, and is determined to continue with a surrogacy he’d begun with his ex. Bringing baby Mia home, he vows that he will be the best father he can be. Nothing in this world matters more to him than caring for his daughter, not even accidentally falling in lust with the doctor next door. Challenged by his growing attraction to Sean, and confronted by painful memories of his family, Ash has to learn that love is all that matters.

When ER doctor Sean moves in with his friends next door to sexy single father Ash, he falls so quickly it takes his breath away. The sex they have is hot, but Ash is adamant his heart is too full with love for his daughter to let anyone else in. Why is Sean the only one who sees how scared Ash is, and how can he prove to his new lover that he desperately wants the three of them to become a family?

I love reading stories about single parents, doing their thing and finding love at the same time. There’s just something about it that normally hits the spot for me. There’s a quiet strength that is present in characters like that. I was missing that feeling in Single by R.J. Scott. I’m usually a HUGE fan of hers but this, just didn’t do it for me.

So on to what I enjoyed about Single.

I liked Sean, Eric and Leo. A house full of first responders trying to find their place in the world. What isn’t to like about this? Also, they have a dog named Cap (short for Captain America)! Asher was every bit the flustered first-time parent. Some of his actions were things that anyone can be like, ‘yep, so-and-so totally did that’.

I really enjoyed Asher’s interactions with Brady. They got my mind moving and I was secretly rooting for a relationship to begin between the two of them. I wanted more text conversations and clues as to who Brady really is. I have my conspiracy theories, but I doubt they’ll come to be, seeing as the tone of Single is not that of a dramatic thriller.

What I didn’t enjoy …

There was so much information left out. I’m a huge believer in tossing the reader into the action of the story. But we barely got any back story to Asher or Sean. The characters were flat. I feel like I knew more about the secondary characters than I did about the Ash and Sean. There wasn’t that much interaction between Sean and Asher. I didn’t feel the chemistry between them. It was extremely short, I read it in about an hour and a half and if it were longer, their interactions drawn out, then perhaps I would have enjoyed this a lot more.