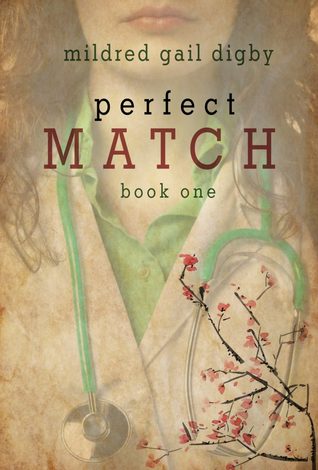 The Summary: After a tragedy derailed her life, Dr. Megan Maier crawls back to the land of her birth to take a job in a private Jewish hospital. There, she meets Syler Terada, a pediatric surgeon with a brash attitude and a lack of respect for authority who incidentally rocks a tuxedo. She captivates Megan with one glance. Conservative culture and rules against fraternization can’t stop Megan. However the secrets she’s running from can.

Perfect Match by Midred Gail Digby is a medical romance, featuring two female doctors navigating the waters at a private Jewish hospital in Japan and discovering a romantic connection between them. Dr. Megan Maier took a new job at a private Jewish Hospital in Japan after facing tragedy in her personal life. She is still learning how to cope with that when she becomes enchanted by fellow doctor, Syler Terada.

The two women are immediately attracted to each other, but they don’t just jump into a relationship. Which I liked. The intimacy between the two women slowly builds. Syler believes that Megan was straight, and a lesbian relationship is something completely new to her. She lets Megan set the pace and slows them down at times to make sure that Megan is okay with moments they are sharing. They took the time to discover each other’s wants and needs within a relationship and that was sweet. It’s what everyone wants for themselves in a relationship. It was great to see it written out in the way it had been.

What was surprising about this book, was the culture that I had never heard about. I didn’t know there were strict roles in the lesbian lifestyle that are held to and if you don’t fit into that mold, then if feels as though you’re looked down on. Almost as if you aren’t a ‘real’ lesbian.

There were a few things I had a issues with. The terminology. There were bits of different languages sprinkled throughout. It is representative of the characters and the setting and it served to put you further into their world. My problem was that I had to stop and look terms up because I couldn’t figure out what they meant via context clues. (The author does provide a link to the terminology on the GoodReads page) I also had a hard time figuring out what Megan and Syler looked like. Yes, I got that Syler was androgynous and slim, but I felt like I had an incomplete picture in my mind.

I was not expecting this to end when it did. It left me a little baffled and then I figured out there was going to be a second book continuing this story line. (I know, I should have figured that out with the face that the title says ‘Book One’. Don’t judge.) There were a lot of unanswered questions which I feel like will be resolved in book two.

Overall this was a pretty good read and I’m glad that I had the opportunity to read it. There is a lot about the LGBTQ+ culture that is different from region to region, and it was enlightening to see it written out. It sparked the need to broaden the novels I read even further than what I currently read.