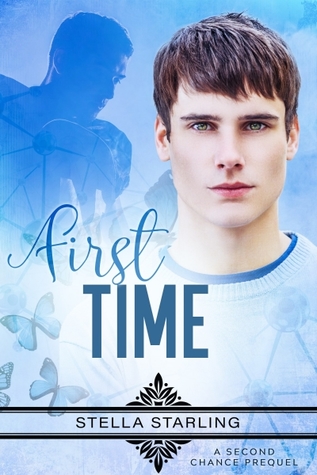 The Summary: Cody McPherson is a high school senior everyone says is destined for the NFL. Simon Andrews is the transfer student who doesn’t want any attention. It’s 2007 and no one is out at Hamilton High School, but there’s a first time for everything, and when biology tutoring sparks the kind of chemistry not found in textbooks, 2007 starts to look like the year that there will be a lot of firsts at Hamilton…

First Time is a coming-of-age gay romance novella of approximately 34,000 words. Every Stella Starling romance takes place in the same interconnected, contemporary world, and First Time is a prequel to Cody and Simon’s present-day love story, which will be told in the novel Second Chance, scheduled for release in 2019.

This was such a sweet read 😍 I wish there had been more. I love a good coming of age, first-time, YA Romance. And this had everything you could want for a mature reader (I say mature because there is a sex scene towards the end that definitely steps over into the NA genre)

Cody McPherson is the star of the football team and is expected to make it to the big leagues. He just needs to get his biology grade up to par to keep playing and to make sure he keeps those scholarships he’s been offered. He’s been keeping his head down, not looking at his team mates in the locker room and managed to get away with not dating throughout high school because he was focusing on football. Simon Andrews is a nobody and just wants to make it through high school without causing any waves and to make sure he gets a scholarship so he can finally be himself without any barriers.

Cody has been fighting his attraction to Simon since Simon started tutoring him. He’s smart, kind, funny, and sweet. He’s everything that Cody wants but thinks he can’t have. Simon thinks Cody is a straight jock that’s completely off limits. They are so cute with each other. They both get flustered, stumble over their words when they are around each other, and dissolve into shy smiles and laughter. It reminded me of the first relationship jitters that everyone gets. You’re happy, excited and want everything all at once. This was exactly how they were with each other.

Cody’s friends melted my heart. They were supportive and had his back, just like they would have on the football field. They had me smiling and laughing with how they were with both Cody and Simon. It didn’t matter that they were gay, or from different ends of the high school social ladder. They were there for each other.

By the time I finished reading this, I was in such a good mood. It was exactly what I needed.

I wish there had been more tutoring scenes, awkward dates and maybe meeting Simon’s mom scene. I know it’s a novella, and there’s a full length book featuring their second chance romance, but I just needed more!! I’m definitely going to be reading more by Stella Starling.