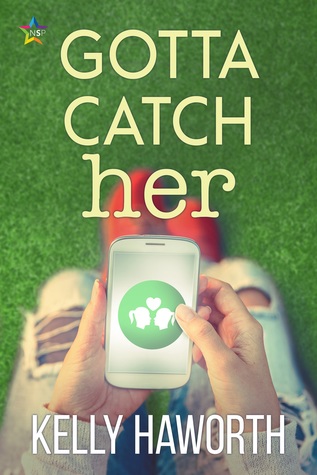 The Summary: Who says phone games are only for kids? Sometimes they give just the respite you need from a hectic life. At least, that’s the way Ann feels about Ani-min Move, an AR mobile game full of cartoon animals caught with nets. Legendary raids have just launched, and Ann arrives at a nearby park to find it full of people of all ages playing the game, including Rachael, a kind, attractive single mom. And sweet! Rachael is more than willing to teach Ann the proper way to spin her nets to snag the raid boss.

Back in reality, Ann has a lot on her plate: a full workload as a project manager, finding the energy to walk her dog, Franny, and now trying to figure out if Rachael is queer. And how does Ann converse with Rachael about her six-year-old son when she doesn’t know a thing about parenting?

Ann is lost as to how to proceed until Rachael takes the guesswork out of the equation by proclaiming she’s bi—right when Ann gets a massive work assignment that consumes way too much of her time. Life/work balance was never Ann’s forte, but between caring for her sweetheart dog and figuring out how to navigate a relationship with a single parent, Ann’s determined to make it work, especially before Rachael gets cold feet and leaves Ann playing by herself.

Gotta Catch Her is a novella featuring two women who meet by chance playing a phone game call, “Ani-Min Move”. The game serves as a break from the reality that our ladies are going through in their every day lives. Ann is a project manager undertaking a massive audit at work, while Rachel is a single-mother running after he young son in the park. I was stoked to see a story featuring a premise like this one. Two characters meeting due to a video game.

The pair meet up with each other during raids a few times before Ann decides to ask Rachel out for coffee. Due to commitments at work and commitments at home, several of their dates get canceled, cut short, or interrupted. It’s how life truly is, but it got frustrating because the point of a romance is for there to be romance! Right?

I feel like if this had been longer, there would have been more interaction between Ann and Rachel this would have been a real treat. Almost all of the scenes revolve around Ani-Min Move and even their first ‘date’ included them playing throughout. Call me old fashioned, but if my date is on their phone its probably because they aren’t interested in me.

Ann and Rachel were just starting to get to know each other and then book ended. There was a romance scene that felt out of place for me, but that’s totally probably a just me thing. It would have read just as well if that scene hadn’t been included.

Did I enjoy it? Yeah, it was a good, quick read. It just left me wanting more for Ann and Rachel.