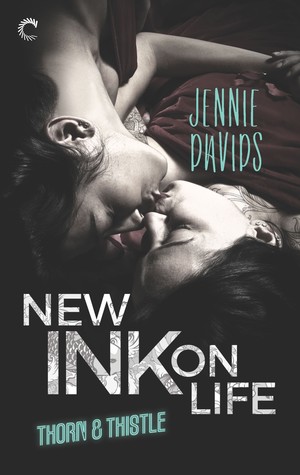 The Summary: Quiet does not equal weak…

Leaving a dependable job to apprentice as a tattoo artist was a drastic step after surviving breast cancer, but Cassie Whiteaker is nearly five years cancer-free. Nearly. She’s not ready to go out on her own until she clears that all-important hurdle. Also off-limits are relationships and sex—something Cassie is sure she’ll never want again.

Struggling tattoo shop owner MJ Flores doesn’t give a damn what people think, but losing Thorn & Thistle would mean losing everything. When her former mentor’s protégé arrives at her door, MJ hires her out of obligation…at first. Cross-stitching goody-goodies are not her type, but Cassie’s business background might just get the shop back on solid footing. They strike a bargain: Cassie will enact new marketing plans and MJ will teach her to find her inner bitch.

Only when clients request to see Cassie—having learned of the beautiful, compassionate tattoos she creates for survivors and their families—does MJ realize all Cassie has endured. And as Cassie’s fears fade, she finds it harder to keep her admiration for her bad-girl boss from reawakening all she’d feared was lost.

Cassie Whiteaker is a survivor. She’s nearly five years cancer free and she’s finally pursuing her dreams. She went from a corporate job to apprenticing as a tattoo artist. She ends up at Thorn & Thistle and MJ Flores hires her out of pity (that’s what it felt like to me). Cassie knew MJ’s mentor who had passed from her fight against cancer. It’s the tipping point that pushes MJ to give Cassie a chance.

The two women couldn’t be more different than each other.  Cassie is quiet, reserved and polite to a fault. MJ is definitely not. She’s loud, brash and has an attitude that is hard to get past. They end up working out a deal, Cassie will help MJ with the shop’s marketing and MJ will help her grow a backbone. Ending up in bed together was supposed to be a no strings kind of deal, but can you really keep something no strings when you start to get to know another person, their struggle and fight?

I liked the concept of New Ink on Life but there was something missing. I think it was the fact that Cassie and MJ were such polar opposites. It was hard for me to like MJ and it was difficult to relate to how meek Cassie was. MJ’s attitude was all a cover and I eventually came to understand that. I did appreciate what she was trying to teach Cassie. To stand up for what she wants and believes in. I just felt like it was the wrong way to go about that. The initial build up to their first kiss and first touches was intense. I was on the edge of my seat waiting for it to happen. But then I was a little let down the further we progressed into the book and their exploration of each other.

I like that art played a big part in Cassie’s growth. This is what she wants to do with her life and she’s settling into her skin as a tattoo artist. The description of some of the pieces she drew were vivid.