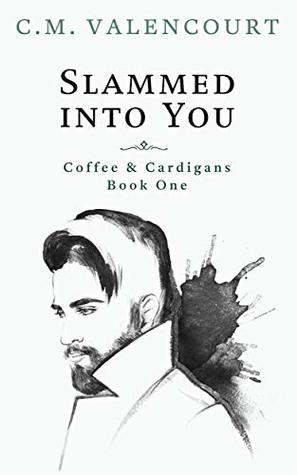 Four Stars out of Five

The Summary: It’s not easy hating who’s someone so goddamn hot.

Amir is a rising slam poet who wants to make it big. While he works a day job at a café, he writes poems like his life depends on it and performs at a local poetry slam every week.

When Landon, the hot new guy desperate to prove himself, joins the team, he threatens Amir’s chance to go to Nationals. Landon soon finds himself locked in a fiery battle with Amir, and they’re both out for blood.

They can’t stand each other. But when a huge fight turns from hatred to fierce passion, they can no longer ignore their attraction to each other. Now they must confront their growing feelings while they vie for the last spot on the team. Can one come out on top without losing the other?

Amir is a budding slam poet with hopes of making something out of his work. He works with a group of poets to improve his work and to compete. His life gets turned upside down when Landon, a new poet with something to prove, joins the team. Amir and Landon can’t stand each other from the get go. Amir feels threatened that Landon might take his spot on the team, and he may end up being a better poet than Amir. That would be a hard pill to swallow.

A passion filled fight turns from words to harsh kisses and touches changes everything for Amir and Landon. Both men enjoy the time they have with each other but its still in the back of their heads that they want a spot on to compete at Nationals. A surprising opportunity for Amir threatens everything he has built with Landon and his slam team. Can he fix what he’s risked?

As soon as I started reading this, I was immediately thrown back into my creative writing club days of high school. We were always trying to make sure we bettered each other’s writing, gave constructive criticism, and there was always that one person who had to be better than the rest of us. The group of characters were just as diverse as any creative writing group that I’ve been part of. It brought up fun memories while I was reading. I loved that we got to see different cultures at work and how their religion influenced their lives. I haven’t read many M/M books with a Muslim main character, so this was a new experience for me.

Their distaste for each other was palpable in the beginning. I almost grimaced whenever they would get in close proximity of each other because I was like, ‘what’s going to happen now?’. I will admit, it was a little strange how quickly they went from enemies, to sweet lovers. But it really didn’t bother me once I was amid them learning about each other and going on dates. They were kind of adorable.

Amir though, that fella needed to get his act together towards the end. I wanted to shake him. Like why do you have to be like that Amir? I was very glad when he woke up and realized what he had been doing.

What I also enjoyed was the fact that poetry was used in the novel It wasn’t only referenced. There were poems from the slams and then the paired poem that Amir and Landon worked on together. It made what I was reading that much more powerful.

I’m definitely looking forward to reading more in the series!