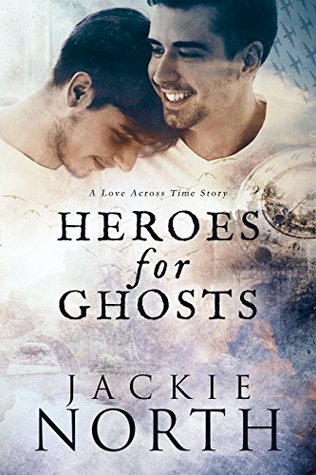 The Summary: Soulmates across time. A sacrifice that could keep them apart forever.

In present day, near the village of Ornes, France, Devon works on his master’s thesis in history as he fantasizes about meeting a WWI American Doughboy.

In 1916, during the Battle of Ornes, Stanley is a young soldier facing the horrors of the battlefield.

Mourning the death of his friends from enemy fire, Stanley volunteers to bring the message for retreat so he can save everyone else in his battalion. While on his mission, mustard gas surrounds Stanley and though he thinks he is dying, he finds himself in a peaceful green meadow where he literally trips over Devon.

Devon doesn’t believe Stanley is who he says he is, a soldier from WWI. But a powerful attraction grows between them, and if Stanley is truly a visitor from the past, then he is Devon’s dream come true. The problem is, Stanley’s soul wants to finish his mission, and time keeps yanking him back to relive his fateful last morning over and over, even as his heart and body long to stay with Devon.

Will Stanley have to choose between Devon and saving his battalion? Will time betray their love, leaving each alone?

So you know how I told you guys that I was going to go back and read book one in the Love Across Time series by Jackie North? Well I did and oh my gosh, ya’ll. I’m a huge war history buff. I ended up taking a lot of classes in university and my ultimate goal after I get my Masters in Public History is to get a spot at the WWII Museum in New Orleans. I need you guys to know that research went into this novel. The weapons, the uniform, the locations, the trench warfare was all research and that made my historian heart all giddy with excitement. That tells me how much Jackie North cares about what she writes. She didn’t just fancy it up and hope for the best.

To the main review and away from my rambling …

It’s 1916 during World War I when we meet Stanley. He’s just lost his best friends to and he’s taken on a suicide mission in order to get the full retreat orders. Stanley doesn’t come close to getting the other half of the orders. Instead of dying, he wakes up in the present day location. The battlefield he had just been choking on mustard gas at was now a cemetery/memorial site.

Devon is writing his thesis on the effect that weather had on the 44th Battalion. He’s staying in the cottage at the cemetery/memorial site. He’s been living a pretty lonely life since he started working on his thesis. People don’t understand his excitement or find him boring. It broke my heart, because a lot of grad students go through this exact thing.

Devon was out walking the trenches when Stanley literal trips over him. Devon can’t believe that Stanley traveled through time. Both men feel an immediate attraction to each other, but in Stanley’s time, this was acceptable. Devon shies away from coming on too strong and settled for taking care of Stanley, and being there for him whenever needed.

We learn that Stanley has many regrets from the day he died. If he would have done certain things, people could have made it out.

I was shocked when he went back in time to the war. I knew it was going to happen (because I read book 2 before book 1). I just wasn’t prepared for how much it broke my heart. It hurt knowing that Stanley was going back to those conditions and he wasn’t going to make it out. Then I hurt for Devon, because he lost the one person who seemed to get him as a person.

There are things Stanley has to fix though and he’s not giving up saving his battalion, no matter how much his heart wants to stay in the present with Devon. I swear this was going to end differently and I was going to throw my iPad across the room in despair.

The way they were with each other, gosh, it was just beautifully written. It made me want that sweetness in my life. It made me believe that there is that possibility in the world. It was a gentle, drawn out romance that left me feeling hopeful and happy when I was finished reading.

This is definitely a book I will keep on my bookshelf and go back to time and time again. This was beautifully written and I’m so glad that I found this series. I’m looking forward to the next book in the series!