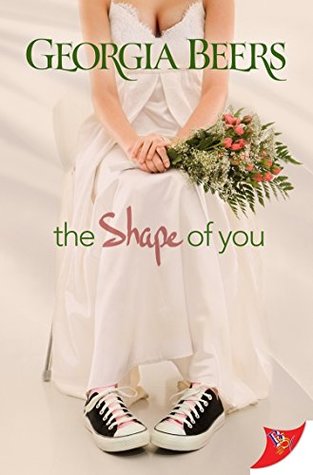 The Summary: Personal trainer Rebecca McCall is furious when her coworker is sidelined and she’s forced to teach the “Be Your Best Bride” class. As if being a size two for your wedding photos is all exercise is good for. Could the whole thing get more vain and sexist? The class is full of preening, giggling Bridezillas, but one woman stands out. The one who confesses she’s only there because her fiancée signed her up. Who does that to someone they care about? And why can’t Rebecca take her eyes off her?

Spencer Thompson is a second-guesser. After making the worst mistake of her life, she’s happy to abdicate responsibility and let other people make her decisions for her. She’s always felt a little bit too soft, a little bit too curvy in all the wrong places. Her fiancée apparently agrees because she signed Spencer up for a class at the gym. Terrified by the online profile of the instructor, the epitome of Zero Body Fat, Spencer is relieved to find someone new, and realistic looking, leading the class. Except the instructor seems to hate her and Spencer has no idea why.

When a perfectly innocent post workout smoothie leads to an earth shattering kiss, Rebecca wonders if she’s been wrong all along, and Spencer is challenged to make another decision that could change her life forever.

Georgia Beers has definitely become one of my favorite F/F authors. Any time I get the opportunity to read any of her books, I jump at it.

I was just as excited about the “Be Your Best Bride” as Spencer and Rebecca were. It just sounded like the easy set up for mean girl, queen bee situation. But Rebecca was the most surprising character. As a trainer I thought she was going to be hardcore, angry fitness instructor. Instead, she was much different. She looked at fitness as, feeling your best and not only worth doing to become a skinny model type.

Spencer, well I could relate to a little too well. I do have to say I have a little more bite than Spencer did. If my wife to be signed me up for a twelve week fitness class, I would have been livid.  Then we would have had a talk and probably would have no longer been wives to be. Because if you don’t like the way I look now? Twelve weeks in a fitness class isn’t going to change it. Instead, Spencer was very passive and just took things. I have a feeling she felt like she didn’t deserve the happiness she was chasing. She just settled.

The main issue of this book, which I knew of from the get-go was the fact that there would probably be infidelity at some point. Spencer is engaged while she’s attracted to her class instructor. Spencer and Rebecca’s chemistry was intense. They were a bit antagonistic towards each other before they figured out what was really going on between them. I think the fact that Spencer was so not in love with Marti and Marti was such a workaholic jerk, that I was rooting for Spencer and Rebecca to get together. They had the passion that soon a to be married couple should have. They communicated with each other, they worked together and then had explosive sex. If you aren’t excited by your partner, or can’t remember the last time you were intimate with them, you may need to stop, think and have a sit down with them.

Rebecca brought Spencer out of her shell and challenged her to be the person she had once been. Then Spencer brought gentleness out of Rebecca that kind of made my heart melt. Just a little.

I like how there is always a healthy dose of reality in this. Spencer’s friends and family weren’t all happy about what she had done, but they did encourage her to think her wants/needs through in order to decide what she truly wanted. Then Spencer and Rebecca didn’t immediately get together. Time passed. Spencer had to figure out who she was.

I thoroughly enjoyed this book and was excited to see how everything turned out.