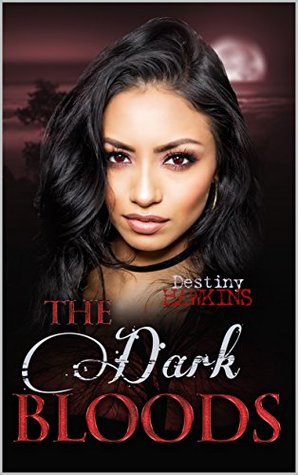 The Summary: Alveya Tera. A monster, a killer, and an abomination. It was hard for anyone to believe that she was anything more, but one wolf thought differently. That was… until she lost control of the hybrid within her and left the Dark Bloods clan covered in blood.

Months later, Alveya returned to the Tera Mansion no better than before, and to make matters worse, she brought a friend. In less than a week after her arrival, a mysterious group of strangers began hunting the one person that she was trying to keep away from. The one that fate wouldn’t let her resist…

And it was damn hard to play keep away while protecting her.

Even through the rage, the loneliness, and the pain of struggling to recover from years of neglect and abuse, Alveya would continue do anything to keep Crystal safe.

Even if it cost her her life.

The Dark Bloods is the second book in the Blue Moon Series by Destiny Hawkins. First, this story is more about Crystal than Alveya, I just want to make that one hundred percent clear.  It’s 85% told from Crystal’s point of view. Which I really liked reading from Crystal’s POV a lot more than the few times I got to read from Alveya’s. *shrug* I just wasn’t Alveya’s greatest fan.

Onwards to the review!

Crystal Blue and her brother Alan are the last remaining wolves in existence. She’s been training to fully being able to call herself alpha and to protect herself from the impending danger from the Krystal Tooths and the newest threat to the Dark Bloods. Vampires. She had previously formed a bond with Alveya, who had ran away from the Dark Bloods and Crystal in fear of the ‘monster’ she was becoming. In the process, Crystal is trying to live her everyday life and improve herself physically and when it comes to shifting. When Alveya returns, she returns with another women and breaks Crystal’s heart just a bit.

It seems like everywhere Crystal  looks, there’s Alveya and Kristy. She’s having to deal with jealousy, angry and keeping her wolf in control. When you think things are going Crystal’s way for once, it’s like a knife to a chest. A group of vampires are out to kidnap Crystal and they’ll do whatever it takes to get her.

I was a bit lost as to where this was going at points but Crystal, Alan, Amber and Angela are what kept me reading and engaged. Alan was such a little brother and he had me laughing out loud at times. Then how Amber would do magicky things in solidarity had my inner evil genius grinning. I will vividly remember the book/classroom scene.

I wish we would have gotten the why the vampires were so focused on taking Crystal. Even if it would have been at the end. There is going to be a book three so maybe then? There were a few sex scenes but as another reviewer mentioned, they were extremely vanilla for two animalistic beings. It felt like they were love scenes in your typical romance novel. Not in a paranormal, action story.

These ladies were kickass and I really enjoyed this aspect of it. They had their faults, they had plans to improve and worked together. Will I read the next one? Most likely.