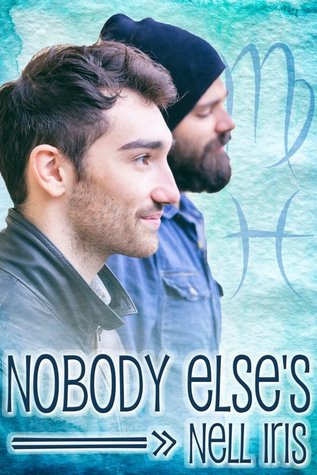 The summary: Mars enters Pisces, giving Beckett Cooper the opportunity to assert himself when it comes to a secret infatuation; his best friend’s younger brother Levi. But can Beckett trust what’s in front of him and be brave enough to take what he wants?

With Venus in Virgo, people usually become more reserved, but Levi Byrne always takes the opposite road of what’s expected of him. So, instead of pulling back, he reaches out for a man he’s been interested in for years; Beckett Cooper.

Is it the celestial bodies aligning to bring together two people destined for each other? Or is it a simple tale of boy meets boy, boy likes boy, and boy wants to kiss boy? Do Beckett and Levi even care, or are they too busy getting to know each other … and falling in love?

I really enjoyed Nobody Else’s! There’s no other way of putting it.

Beckett Cooper has secretly been attracted to his best friend’s little brother, Levi. Beckett’s self-confidence isn’t good, so when he starts seeing signs that Levi may be interested in him, it’s hard for him to want to act. The fear of rejection and of causing a rift between his best friend is enough to put him on edge. But once Levi opens up more, Beckett can’t resist what he’s being offered. A chance of happiness.

I thoroughly enjoyed the horoscopes at the beginning of each chapter. You will too. I was cracking up laughing at some of them and was so glad they were included. Don’t shy away from this if you’re worried you’ll be immersed in astrology, you won’t. But it is a great addition to each chapter and very fitting to the story line.

Beckett is in no way perfect and I found myself relating to him, very much so. He doesn’t have abs, or large muscles, Beckett is your normal guy who is also Harry Potter geek. (I secretly fist pumped with that because I was like there is hope out there for weirdos like me!) He doesn’t expect people to be attracted to him and puts up with his friends inappropriate comments about LGBT people.

I think what made this shine was how Beckett reacted to Levi and Levi’s interest in him. It felt real and honest. Like I would have had the same worries that Beckett had. How could Levi be attracted to someone like him? Well Levi made it very clear that he loved Beckett exactly the way he was. That is what made me love this so much. How they were with each other, reassuring and honest, but always willing to communicate about their uncertainties.

So, the question is, should you read this? It’s about 20K of awesome and I read it in a quick 45 minutes but it left me feeling happy. So yes. Read it. If you need a quick escape, or a book to keep loaded on your kindle to reread, this is one that I’d recommend for that.