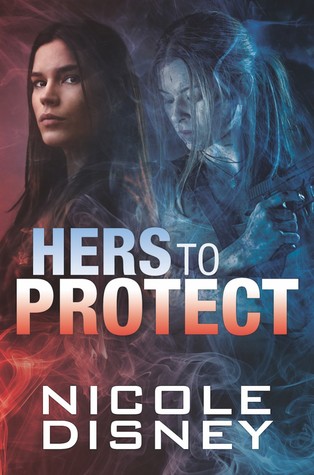 The Summary: Kaia Sorano is a police officer in the dangerous and gang dominated streets of Chicago. She thinks she’s prepared for anything, but when she responds to a bloody domestic violence call, only to find her high school sweetheart is the victim, she knows she has to find a way to help.

When Adrienne Contreras’s mother moved her to the south side of Chicago at seventeen, she quickly saw her safe life and idealistic love with Kaia replaced with poverty, crime, and violence. Now twenty-seven, Adrienne is dating Gianna, a high-ranking member of a brutal gang. She has the streets figured out, but the first rule is to never talk to cops, even one she used to be in love with.

As their attraction grows into love, Adrienne and Kaia struggle to see past the changes in each other and escape Gianna and the gang, who have threatened both their lives.

Hers to Protect is a hard book for me to review. There are two sides to every story and seeing it told from a cops point of view and then from a gang member’s point of view was something I hadn’t seen done before. I liked that we were getting to see Kaia, Adrienne, Gianna and Anna’s story unfold but there was such a disconnect between the two main characters, it was hard to read.

I love a cop story, the violence, the gore, the gritty gang life? None of that bothered me. It was a part of this story and if it had been left out, I don’t think it would have worked at all. But if you’ve ever been a friend with a cop, if you’ve ever had cops in your family, the things Kaia did for ‘love’ they wouldn’t have done. There’s a set of values, morals and care that cops have. Kaia abandoned all of that. Does it happen in real life? Oh, no doubt that it does. But how easily she drifted over the line from lawful to unlawful because of Adrienne, it made me angry. Sure in the end Adrienne realized that not all cops were corrupt but the whole thing irked me.

Due to the above, I found their rekindled romance unbelievable. I read some pretty crazy things, like men getting pregnant crazy, but this left a bad taste in my mouth. Sure they were teenagers in love, separated by parents and tragedy but it didn’t feel real. Like maybe more internal thought? More talk between the two? I don’t know. They were missing something vital for me.

Do I think that was the over all attention and to grab your attention to make you think? I do. Disney wanted us to see the allure of gang life, how far they would go for each other and how that influenced even those not initiated into the gang yet. She showed up that cops are both good and bad. That anyone can be tempted for the right reasons.

I wasn’t the biggest fan of her romance scenes. It was super fun reading about dancing tongues every time they kissed. It was a bit of an instant replay every time they got together.  (I’m sorry, that sounds really bitchy and it could be the fact I had a procedure done on my neck this morning) But seriously, give us a little more variety.

Do I believe that Nicole Disney will become an amazing author? Oh yes. She has skill and can craft a scene well but there were bits and pieces that tricked a nerve for me. Maybe this one wasn’t my cup of tea and perhaps it’ll be yours.

One thought on “Hers to Protect by Nicole Disney”