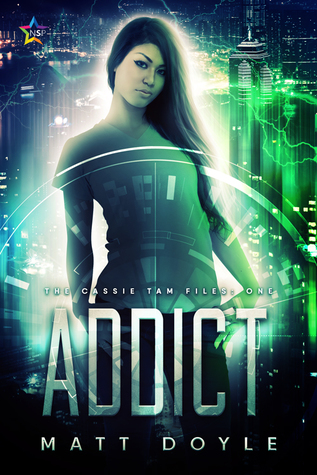 The Summary: New Hopeland was built to be the centre of the technological age, but like everywhere else, it has its dark side. Assassins, drug dealers and crooked businessmen form a vital part of the city’s make-up, and sometimes, the police are in too deep themselves to be effective. But hey, there are always other options …

For P.I. Cassie Tam, business has been slow. So, when she’s hired to investigate the death of a local VR addict named Eddie Redwood, she thinks it’ll be easy money. All she has to do is prove to the deceased’s sister Lori that the local P.D. were right to call it an accidental overdose. The more she digs though, the more things don’t seem to sit right, and soon, Cassie finds herself knee deep in a murder investigation. But that’s just the start of her problems.

When the case forces Cassie to make contact with her drug dealing ex-girlfriend, Charlie Goldman, she’s left with a whole lot of long buried personal issues to deal with. Then there’s her client. Lori Redwood is a Tech Shifter, someone who uses a metal exoskeleton to roleplay as an animal. Cassie isn’t one to judge, but the Tech Shifting community has always left her a bit nervous. That wouldn’t be a problem if Lori wasn’t fast becoming the first person that she’s been genuinely attracted to since splitting with Charlie. Oh, and then there’s the small matter of the police wanting her to back off the case.

It was supposed to be easy money. P.I. Cassie Tam takes on what should be an open and shut case, Eddie Redwood’s accidental overdose and death. He’s a VR addict. It makes sense. All she’d have to prove to Eddie’s sister, Lori, is that his death was exactly what it appeared to be and pocket a pretty penny in the process.

She probably should have known that it wouldn’t work out that way.

As she digs deeper and deeper, Cassie is thrust into more than she asked for. There are assassins, drug dealers, cops who want her to back off, and the world of Tech Shifting. And it’s the first time she’s felt a tug of attraction to anyone since her last breakup. Of course it’d be Lori Redwood, her current client who spends time as a tech shifted.

Right from the first pages, you get Cassie’s sarcasm, snark and wit. Think, Veronica Mars as an adult in a tech heavy world with a touch of crime noire. She doesn’t change who she is for anyone. She is one hundred percent Cassie every minute of the day.  The fact that Bert, who I refuse to spoil you on, is just as snarky as Cassie, it’s perfect.

The tech in this world, it went beyond my expectations. I didn’t think of applying it in the methods that Matt Doyle did in this novel. It was vivid, understandable and just as much of the setting as Cassie’s ratty apartment was.

As for the romance, Cassie and Lori flirt throughout. There was a part of me that was all about that. I’m not a fan of characters just jumping into bed. Cassie’s caution but ability to learn why Lori is a tech shifter was a dynamic you don’t really see explore. Cassie rolled with it and took the time to understand. Towards the end is when you get the most action romance wise.

There were times that I forgot there was a mystery happening. I was more interested in Cassie and Lori. I couldn’t help myself. I’m a sucker for a slow burn. I also did not see the reason behind Eddie Redwood’s death coming. It was a surprise but one I felt there could have been a little more build up to. So it was good that I didn’t see it coming but it felt a little flat to me.

Am I going to read the next book when it comes out? You better believe I am. I thoroughly enjoyed this and I’m glad I got the opportunity to read and review it.

Go get your copy Here!

One thought on “Addict by Matt Doyle”