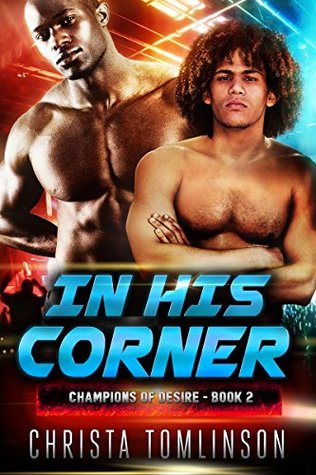 The Summary: Tré Montgomery loves working with his best friend, Brandon Wilkes. As a professional wrestling tag team, they wow crowds across the country. While Tré craves more from his talented and gorgeous partner, life taught him that confessing his feelings threatens not only friendships, but careers.

Brandon is one of the best when it comes to connecting with an audience of thousands. But when he tries to connect with the only man he truly wants, that ability fizzles out. Hiding his true desires behind a front of playful teasing, he hopes Tré will either catch on or make it clear he’s not interested.

When subtly fails, Brandon makes a decision that threatens to tear his relationship with Tré apart. If they want to stay together, both men will have to bring the confidence they display in the ring into their private lives. Will they brave the risks to go from tag team partners to lovers? Or is their shot at love destined to go down for the count?

I think I’ve found a new one-click author. Christa Tomlinson doesn’t let you down with In His Corner. Tré and Brandon are tag team partners in the ring and best friends outside of the ring who are both suppressing an attraction to each other for fear that it may ruin the relationship they do have. They try to admit to these feelings in a round-about way but then end up not getting the message. Brandon runs to another wrestling company, Tré has to go back to a singles matches and then they inevitably come back together professionally and romantically but life is never that easy.

The angst in this one was juicy, and I loved it. Because both Tré  and Brandon are struggling with their feelings, they don’t make the best decisions. It takes Brandon leaving for a rival wrestling company. Which just so happens to have a spy in the ranks of Frontier wrestling. So that adds another layer of stress for Brandon when he comes back to Frontier. Is he the spy? People sure think so.

What I liked about In His Corner was how real it felt. They magnetic attraction between the two men, their chemistry in and out of the ring? You knew it was going to be explosive in the bedroom. And Tomlinson has a knack with these scenes. But what was interesting was Brandon needs a little more to make it to the finish line. She wrote that aspect from his side and in talking with Tré  about what he needs elegantly. It didn’t feel over done or dramatized. It was one hundred percent honest and Tré’s response  was perfect.

The wrestling scenes were full of action and fun. I felt like I was in the ring with Tré and Brandon and I could hear the audience in the background. The only issue I had was how last minute finding the ‘mole’ was. It felt like an after thought and she had to hurry up and throw it in there but there’s lead up to a third book featuring Kenji. So there was no rush. That’s my only complaint. And I’m nitpicking you guys. I loved this.

Go read this! You will not be disappointed.