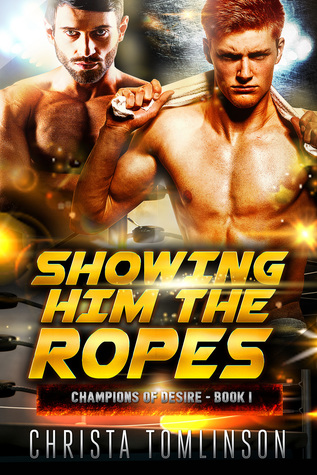 The Summary: When a Gruff Veteran Meets an Irrepressible Rookie, Who Will Come Out on Top?

Chance “The Chancellor” Gerhardt – multi-time champion and respected veteran of the locker room – worries he’s entering the twilight of his professional wrestling career. All he wants is one more shot at a championship title run. Instead, his boss saddles him with mentoring a hot, young rookie, Devin Jacobs.

Devin has admired The Chancellor for years, and he’s thrilled to work up close and personal with the steely eyed older wrestler. But while Devin learns from his mentor, he can’t resist admiring the man’s deliciously burly physique.

Trapped together in the intimacy of late-night road trips and shared hotel rooms, longing glances lead to whispered confessions of desire. Devin would love to bring a little warmth and sexiness to his hero’s cold and solitary life. Unfortunately, Chance refuses the rookie’s flirting. After years in the business, he knows their careers will be ruined if their relationship is discovered by the fans. But Devin won’t let that fear stop him from going after everything he wants – championship gold and the man he desires.

Can Devin find a way to prove to Chance that they can have it all? Or will their shot at love be defeated 1-2-3?

HOLY SMOKES Y’ALL! I read this in one sitting and then started the next book in the series. That’s how much I loved this. If I hadn’t taken my night time meds, I probably would have stayed up all night reading that one too. I love sports M/M romances. Give me pretty much and sport and I’ll sink right into it. I like to think I have the basic knowledge of most sports I can follow along just fine. But wrestling? I know next to nothing.

So let me say this, you don’t have to be a avid wrestler fan to understand what’s going on. Tomlinson uses the terminology but does so in a way that you understand as your reading. If you don’t, she added a handy little glossary in the beginning. I scanned it before reading but it wasn’t necessary.

I have fallen down the hole of age-gap and teacher/student kinds romances. So this hit every spot and then some.

The story weaved around Chance and Devin was intriguing. Not only did you get insider knowledge of what happens back stage, but you got to see the ins and out of the their work and how much of a family these men are to each other.

Chance, The Chancellor, has been part of the wrestling world for a good many of years. He’s gone through being the rookie, the good guy, the bad guy, won titles and lost them to younger wrestlers. When he gets tasked with teaching Devin the ropes, making sure he doesn’t end up going down the path of drugs and booze, he never expected to be so attracted to Devin or have that attraction be returned.

Chance fights it from the beginning. He has never been involved with someone he works with and he’s not going to start now. Especially with a rookie he’s supposed to be mentoring. But Devin makes it difficult to resist. There’s something about the red-head that keeps Chance looking. He flirts with Chance often and only backs off when Chance makes it clear that this can’t happen.

Temptation becomes too much and once he has a taste of Devin, no matter how hard he fights, he can’t stop coming back for more. Now I don’t really go too into detail with sex scenes. It’s difficult for me to write them so when I come across some amazing scenes, I have to share. Everything felt natural. The progression from the initial flirting, to the kisses, to the touches and the actual sex scenes flowed together seamlessly. I have some serious jealousy for Tomlinson’s ability to write these scenes.

Even the arguments that happened between the pair feel real. Chance feeling like he’s taking advantage of Devin, or having people think Devin is working his way up the ladder through sleeping with the veterans of the sport. It wasn’t all roses for the pair and that just made their story even better.

I’m going to go read the next book in the Champions of Desire series, In His Corner!