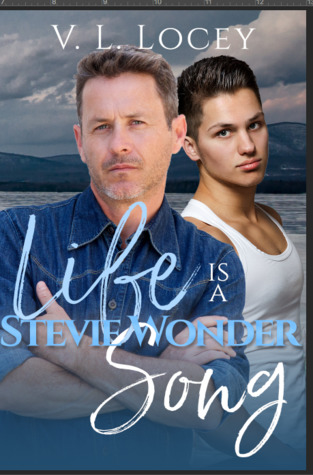 Summary: Authors know that their muse is a fickle creature. Best-selling spy novelist Stephen Ramsey has been in a hate-hate relationship with his inspiration for months. When Stephen’s publisher lays a legal ultimatum upon him, with a rapidly approaching deadline, he knows he must do something to kick-start his creativity or face the unemployment line. His daughter comes up with a possible answer: a summer camp for the creative soul. With nothing to lose, Stephen packs up his laptop, phonograph and beloved record albums and heads from Greenwich Village to the Catskill Mountains.

There, among a horde of college students attending for extra credits, is Declan Pomeroy, a photographer of fey creatures who is twenty-two years younger than Stephen. The woods are a magical place, and he quickly finds himself falling under the spell of the free-spirited photographer. Confusion wars with desire inside Stephen as he succumbs to the feelings welling up inside. But, sadly, summer camp always has to end. Can a man who has just found himself really leave the person that makes his heart sing?

This is a re-release (December 2015), so you guys may have already read this, but I hadn’t. I’m always super excited when the opportunity to read and review anything by V.L. Locey comes up. I’m a fan girl and I freely admit it. I have slowly found that I love a May/December story line. There something about the age difference that works for me.

Stephen, an author who has lost his muse and creativity follows his daughter’s advice and goes to a retreat in order to bang out a novel and meet the deadline his publisher has put on him. When he gets there, there’s no internet or cell service. There are no distractions. (Which as an author myself, that is mildly terrifying and extremely appealing to me.) It takes a little time before he realizes he isn’t one hundred percent on his own out there. There are other artistic, college student, types who are trying to get their own work done as well.

That’s when he meets Declan. Declan is a free spirit, who is a fey photographer. Even I raised a brow at that.  There’s something about him, being one hundred percent himself that pulled at me in. He didn’t care what people thought about him, and did what he wanted. The sense of freedom I got when he was in a scene was kind of serene.

The two of them couldn’t be more different from each other, but they’re drawn to each other. Despite how skeptical Stephen is that Declan could actually be attracted to him, or the fact that he was attracted to a man in the first place he goes for it. It may only last the summer but with his writing increasing and being happier than he’s ever been, Stephen embraces the relationship.

One of the things I enjoy about Locey’s writing is the fact I can see everything like a movie when I’m reading. I’m drawn into the world she’s created and I don’t want the story to end. The tone of the story felt very author-ish. If that makes sense? Some of the word choice wasn’t what you’d find in average books. It was like you were in Stephen’s head as the story progressed.

For a short novella, I enjoyed this. I think it definitely benefited from the newly added epilogue. There were some aspects that happened a little too fast for my liking but I put that down as being a shorter story and wishing there was more.  Declan seemed extremely young for twenty-two. I definitely knew all the music Stephen was playing back when I was teenager, thanks to my parents, in the early 2000’s. The HEA ending was a major bonus.