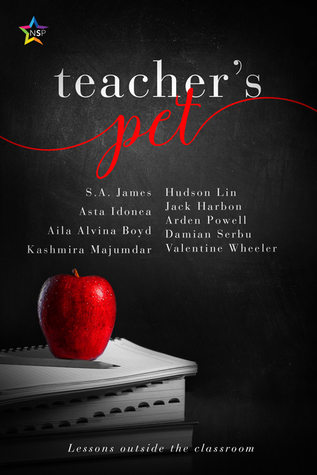 Titles and Summaries:
By Virtue Fall by Kashmira Majumdar – The rules have changed…and so have the consequences for breaking them.

Striking Gold by S.A. James – Sometimes when we think we have no choice, life brings something brighter.

Full Marks by Asta Idonea – When Jacob seeks out his favourite lecturer at a university reunion, will he get full marks?

Lessons for a Lifetime by Hudson Lin – A second language, a first chance at love.

Welcome to Ms Skinner’s Freshman Composition by Aila Alvina Boyd – After auditioning for a play, professor and student find themselves cast opposite each other as romantic leads.

Piece of Cake by Valentine Wheeler – All Richard wanted was a nice, quiet retirement. His kids aren’t going to let that happen.

Professor Ghost by Damian Serbu – An otherworldly mentor might be his way out.

Bare by Jack Harbon – When a passion for art turns into something more.

I have become a huge fan of the anthologies that NineStar Press puts out. This one is amazing. It’s a group of stories focused on the Teacher/Student relationship and it’s done in a way that  doesn’t give you the ick factor of an underage student being preyed on by a teacher. Instead you get a very well rounded group of authors who give us stories from a variety of age groups. There’s a story in this collection for everyone.

My absolute favorites were: The Botanist’s Apprentice, Bare, Welcome to Ms. Skinner’s Freshman Composition and Piece of Cake.

In The Botanist’s Apprentice you are given a historical, M/M story.  Not only is there a reluctant teacher with a backstory but there’s a student that is intelligent and is interested in poisonous plants and their uses. I knew that there was going to be a plant involved in getting these two together but it was delicious. I honestly want to read more about these two.

Bare, let me cool off for a second. An awkward, college art student i sstepping way out of his boundaries and volunteers as a nude model during a free spring break class one of his instructors is giving. Then he gets asked to participate in a photo shoot for the teacher later on. This was perfection. The heat level between the two, wow. It’s off the charts. It hit all my spots for a good M/M story.

Ms. Skinner’s Freshman Composition features a transgender character, male to female. She now teaches at a community college and uses the opportunity to get back to what she loves, participating in theater along with her teaching. She didn’t expect to be treated to a former student who was in her high school class before her transition. The chemistry is fiery. There’s a lot of anger and misunderstanding between the two but once they start to work with each other in the production they’re in, it gets obvious that they are attracted to each other rather than hateful to each other.

I loved this collection of stories because of the variety you go. It wasn’t all erotica, it wasn’t all young couples. There were older couples. there were couples of different cultures. It covered a wide spectrum of romances and I think that’s what appeals to me so much.

I would definitely give this one a read!