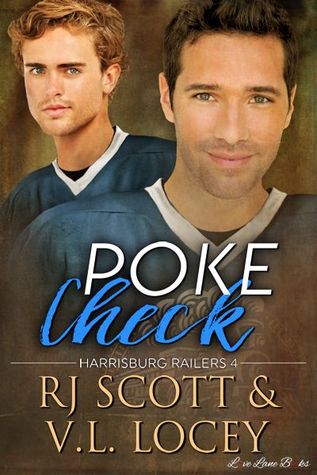 This is book four in the Harrisburg Railers series

The Summary: Stanislav “Stan” Lyamin is happy playing for the Railers. The towering goalie is well-loved, respected, and making a home for himself even though that home only contains him, his cat, and his growing Pokemon trading card collection. Stan prefers it that way. He’d given his heart to a man in a secret affair, and that man walked away, leaving Stan shattered. Now Erik is back in his life, and he has the same tumultuous effect he had on Stan’s heart as before. This time it’s not just a kissable mouth and sweet blond curls that Erik has brought to Harrisburg, there’s a soon-to-be ex-wife and a precious baby. Despite the vow Stan made to hate Erik forever, he’s now finding it harder and harder to turn away.

Erik Gunnarsson’s dream had always been to play in the NHL, he just never imagined he’d land a contract with the Railers. Who would have thought that fate would put him on the same team as Stanislav Lyamin; the man whose heart he’d callously broken?

Secrets and lies had defined their summer relationship, and the choice that Erik made to end it all haunts him still. In the middle of a messy divorce and with a baby in tow, Erik finds himself back in Stan’s life. Now all he has to do is be the best dad he can be, prove to the team that he deserves the chance to stay on the roster and try his hardest to get Stan to forgive him. Is it possible to persuade a man who hates you to give love a second chance?

I’ve been waiting for Stan’s story since meeting him in Changing Lines, so to find out that he was getting his own book, I was beyond excited. There’s something about a huge, Russian goalie who is still figuring his way through the English language while playing the sport he loves, jockey.  I found a combination of a few real life players in Stan. He had the humor of Marc-Andre Fleury. He had the love of animals and difficulties with languages from Evgeni Malkin. The intense focus and fury of Nikita Kucherov . Finally the goal flipping, anger of Henrik Lundqvist (yeah I know Locey is a huge fan of the New York Rangers but *shakes fist*)

What I particularly enjoyed about Poke Check was the fact that Stan and Erik met during the off season and had a wild affair. Then Erika breaks Stan’s heart. He sleeps with a woman and ends up getting her pregnant and marries her. Ending up on the Railers with Stan was not what either of them expected. Stan’s hurt was palpable and one hundred percent real. I would have the hardest time working with someone who broke my heart but having to work as closely as they do? Very difficult. They kept it professional and end up being friendly with each other.

There was a lot going on in this. It was neat to see so much Stan’s life outside of hockey. We got to meet his sister Galina and see her have a whirlwind romance with Arvy. Stan also had to deal with his country’s stance on homosexuality and his fear of what would happen to his mother if he was found out.  That was very real and relevant to Russian athletes today.

Erik was a cutie with his cute son Noah. There were a lot of little single-dad moments that I loved getting to see because you know there’s going to be a time the babysitter is sick, you don’t have a backup and what do you do? He was very much about making sure his son was happy and healthy.

Over all I really enjoyed this book.  It had everything I love about a RJ Scott and VL Locey book, hockey, romance, sexy scenes, a bit of drama and a happily ever after.