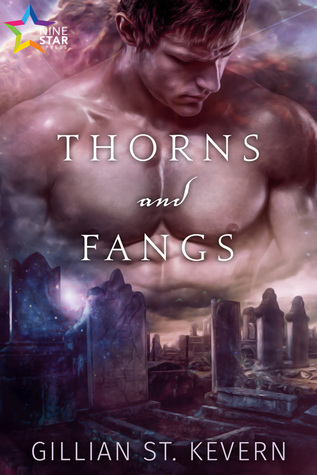 Thorns and Fangs Book One

Summary: Nate is caught between two dangerously hot vampires who can compel people to do whatever they want and a ruthless necromancer who wants Nate for all the wrong reasons—and that’s only the start of his problems.

Escort Nate prides himself on two things: his ability to please his clients and his normality – living in the monster capital of the world, ordinary is rare. Hunter, a darkly charming vampire with more charisma than is good for him, decides Nate is just what he needs. Nate’s sympathetic nature and skill in the bedroom are put to the ultimate test. But Hunter wants Nate for someone else – his brother, Ben. Nate is immediately attracted by the control with which Ben holds his sensitive nature in force. Too afraid of becoming a monster to allow himself to feel, Ben struggles to resist Nate’s generosity of emotion. As Nate’s normal world crumbles around him, and he desperately searches for a way to save Ben, Nate is becoming the necromancer’s latest victim.

Nate is forced to let go of and embrace powers he doesn’t fully understand. In defiance of Ben’s vampire sire and hunted by Department Seven, Nate and Ben finally learn to trust and rely on each other.

When I started this, I did not expect the journey I’d be in for. I loved every second of it!

When you begin reading, you meet Nate. He’s an escort and living in a city full of all the creatures that go bump in the night. Hunter, hires Nate for his brother, Ben. It is everything that Nate is attracted to. He’s gorgeous, kind and he does his best to control every aspect of his vampiric nature because he doesn’t want to be the monster he thinks he is.

The first few chapters are full of some amazing sex scenes. Like, *fans self* I didn’t think it was going open up like that but whoa. As an aspiring writer I would love to be able to write sex scenes like St. Kevern does. That sounds really creepy now that I’m reading this back but it’s true. It was full of lust, need, want, and overwhelming reaction/response from the characters.

What I really loved was the entire storyline. It wasn’t just about sex. It was about Ben and Nate fighting through everything that life through at them. And a wild Necromancer who sets his sight on the Saltaire sire and his sons using Nate to get to them, well, that was a lot to handle.

This story becomes a full on paranormal thriller and you can’t put the book down. It seems like in every chapter there’s a new twist and it keeps you on your toes. I loved the fact that all the twists happened. Nate, finds out more about himself as the story progresses and you’re just like, “GIVE ME ANSWERS NOW!”.  You know that feeling you really get into book and you have to know what happens? Yeah, this is what happened as I read Thorns and Fangs.

I love that their story isn’t ending here. Ben and Nate are set to move back to Nate’s home with his brother. I’m already wishing I had that book in my hands. I want to see how Ben and Nate’s relationship progresses. I want to know more about Nate and his family!

Go read this now!! Seriously, I just want everyone to read it so I can talk to someone about Ben and Nate.