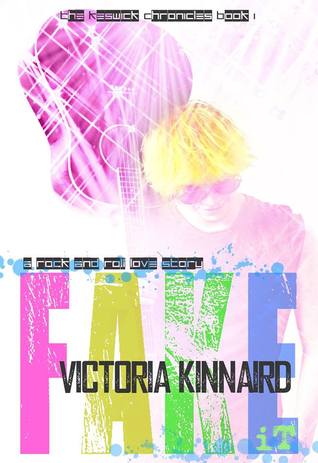 Book one of the Keswick Chronicles

The Summary: Jack Daveyson grew up with a guitar in his hands and his head full of melodies. Ten years after writing his first riff, he knows exactly what he wants to do with his life – graduate high school, escape Wayville and hit the road with his band, Forever Fading Echoes.

But it’s a bit hard to launch a band without a singer. Enter JJ Keswick.

JJ is everything Jack isn’t: rich, confident and popular. He also happens to be one of the best singers Jack has ever heard.

Jack reluctantly lets JJ into his band and into his life. The spark between them in the practice studio grows into something neither of them were expecting – a love that threatens to tear their lives apart.

Fake It by Victoria Kinnaird is a YA book that encompasses everything I love about the YA genre with the LGBTQ appeal as the cherry on top. I’m not a fan of teenagers getting into alcohol as much as JJ did (it’s a personal thing and I live in New Orleans so I know kids can party) but it wasn’t overly done. Jack laid down the law on JJ showing up under the influence to band practices and gigs. Having someone put that rule down, made me go, okay, I’m going to keep reading.

In the beginning there was a lot of play on the typical character types and makes them into something more. Jack isn’t just the gay kid who gets bullied and JJ is not just a rich-kid throwaway. There were times where I could pinpoint that certain characters were just like my friends back in high school. It felt like I was part of that world while I was reading.

The imagery of each setting, the record store, JJ’s house, Jack’s house, I could see these places in my mind.

The struggle Jack faces, deciding on college or pursuing his dream of having a legitimate band and skipping college that hit home. I know how hard it was for him to make that decision, to tell his dad what he chose and he was going to do it no matter how hard it was. I didn’t go that route and now I have a useless degree, work in retail and follow my dream on the side. I wish I could have been as brace as Jack was.

Absolutely loved this and can’t wait to read the next in the series!

One thought on “Fake It by Victoria Kinnaird”