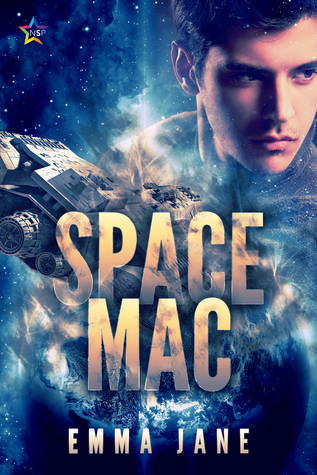 Summary: Cocky escort Mackenzie “Mac” Jones has just the right type of blood so that when he steals an odd silver brooch from a client, it transports him to a strange planet. Frightened and confused—and confronted by aliens—he flees and ends up bumping into a handsome humanoid male named Teevar.

But Teevar and his companions are also on the run, and Mac finds himself embroiled in the affairs of his new friends with no idea how to get back to Earth. Can Mac and Teevar survive long enough to work out their feelings for each other? And will Mac ever see home again?

What you need to know about Space Mac is that it is one hundred percent a space adventure. You get thrust into a universe, just as lost and confused as Mac is BUT when it all starts to unfold, that’s when it gets good. I almost gave up on this in the beginning because I couldn’t get into the first few pages (yes, I’m that reader when it comes to sci-fi) but as soon as Mac met up with the crew? That action drew me in.

So before the good, here’s the bad. I felt that there was something missing. I needed more explanation to why Mac had been taken. More than what was given. I needed to know more about Ral and Leanara other than they committed a crime (nothing specified or I completely missed it which is possible) and they were a ragtag group running for their lives.

Teevar, I loved. I felt kinship with him. He was very much an outsider on his planet. Even when he was planets away, he still had that fear that someone was going to see him and they were going to treat him like he was on his home planet. Mac challenged him and pushed Teevar out of his comfort zone.

Mac had that arrogant, I’m human and that makes me important vibe. But Lenara and the crew put him back to rights. I think that is what saved him was the way he interacted with Teevar towards the middle/end. In the beginning, he was a dick. Running for your life in space can change things though.

There were a few sex scenes but there were more cut to black scenes. So if hardcore sex is your thing, you won’t find that here. I thought everything was appropriate and sometimes I’m in the mood for less descriptive sex scenes so I read this book at the perfect time.

There were space shenanigans, con-man tactics and a huge universe that I hope Emma Jane goes on to the explore. It was left open so she could. Definitely one I would give a read!