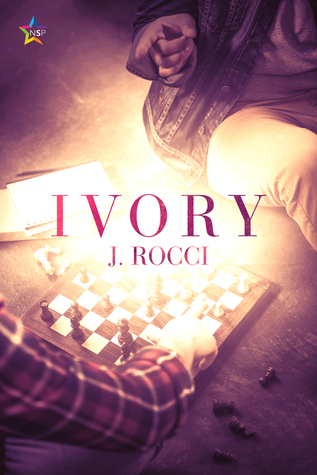 Summary: Trapped by familial obligations, engaged to a fiancée he doesn’t love, and crippled by the regrets of his past, Dr. Bradley Durrant is miserable and rapidly caring less about his own health as he works himself to the bone at the family hospital. But then he meets Nashan Windham, the grandson of his late father’s scandalous old friend, and Brad’s downward spiral is derailed, at least for the moment.

Brad lets Nashan and his grandfather pull him into a world where families—blood and the ones you choose—support each other and understand that love is unconditional. Brad gets his life together again, with Nashan’s help, and he can finally accept who he is and knows what he wants, but can he convince Nashan?

Ivory by J. Rocci is about Dr. Bradley Durrant who feels trapped by familial obligations and that he can’t be who he truly is. He’s barely living life, if what you call what he is doing living. He’s barely there and quickly spiraling. Then he starts playing chess with his elderly neighbor, Mr. Windham, every Tuesday. During these games he slowly begins to heal and wake up from the passive way he had been living.

During one of these chess nights, Brad meets Mr. Windham’s grandson, Nashan. As Brad spends time with the Windham’s he starts to flourish and becomes the man he always hoped to be. He’s happy, taking time for himself and enjoying life.

I think what resonated with me was the fact that I can relate to Brad so much. It hurt seeing how much he had given up on life and was only living for his patients. Then when Nashan appeared, it was the little bit of hope Brad needed to make a change. Nashan offered Brad something he never had. A true friend. Seeing their relationship blossom, it just left me feeling like I was wrapped up in a warm blanket snuggled up with my pillows. That good ya’ll.

Now I’m going to go find everything by Rocci and read it. So if you don’t hear from me for a while, my bad.