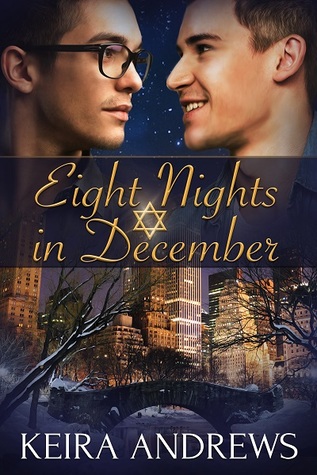 Summary: A geek. A virgin. One sexy holiday.

Orphaned Lucas figures spending the holidays with his obnoxious roommate’s family in New York City is better than staying alone on campus upstate. He ends up sharing a room again, this time with his roommate’s brother, Nate. Geeky photographer Nate isn’t at all what Lucas expects. In fact, he’s incredibly sexy—especially when he invites Lucas into his darkroom…

They hide their attraction during Hanukkah celebrations, but behind closed doors, Lucas and Nate can’t keep their hands (or mouths) off each other. Nate’s only looking for a bit of holiday fun, and amazing sex with a hot virgin definitely fits the bill. Yet as the candles burn, Nate and Lucas begin to realize eight nights will never be enough.

Eight Nights in December by Keira Andrews is a Hanukkah based romance. Lucas gets talked into spending the university winter holiday with his room mate’s family where he meets Nate. Sparks almost immediately start flying between the two.

I’ve never outright looked for a Hannukah romance but I was excited to see it. I wanted to spend my morning curled up in bed reading it. That’s exactly what I did.

Lucas is unsure of himself and it’s perfectly awkward. I’m just like Lucas in that sense. I don’t really want to be here but okay, looks like I’m stuck here vibe. His inner dialogue was spot on and he had me laughing out loud.

Nate, oh goodness. The geeky, sex god. Is that even possible? Well it is now. I have a thing for glasses and Andrews took the time to write about taking them off in sex scenes. (I know I’m a weirdo, but you just don’t fling your glasses off in a fit of passion. And you definitely don’t let them smash against your face while kissing. Say no to dirty lenses kids.)

My favorite part was how both Nate and Lucas were written. They learned who they were as their story progressed. They both came to their own realizations about who they believed they were and wanted to be. Then they came to a few realizations as a couple.

This left me smiling and wanting to read more about these sweet, smart, sexy boys.

Would I recommend this? Yes! Go get it now!!!