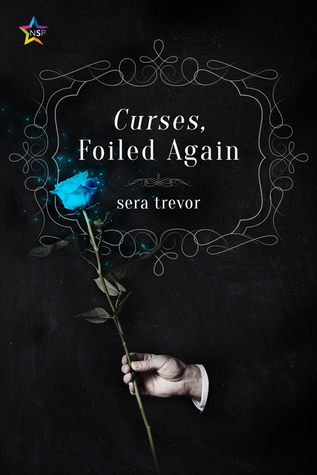 Summary: Felix is a vampire—a fierce creature of the night who strikes terror into the hearts of everyone unlucky enough to become his prey. Or at least, that’s what he thought was true, until he met John. John is completely unimpressed with Felix, much to his dismay. Felix becomes fixated on proving his ferocity to John—and when that doesn’t work, he strives to make any impression on him at all.

John is a witch, and as all witches know, vampires are notoriously stupid creatures who only have the power to hurt those who fear them. Besides, he’s under a curse much more frightening than any vampire. Felix’s desperate attempts to impress him annoy John at first, but gradually, they become sort of endearing. Because of his curse, John has pushed everyone in his life away. But Felix can’t be hurt, so there’s no harm in letting him hang around.

Felix is technically dead. John has nothing left to live for. But together, they might have a shot at life

Curses, Foiled Again features a cursed witch (John) who is not at all impressed with the vampire (Felix) that has focused on him. Eventually, John can’t help but be won over by Felix’s determination.

This is going to be an interesting review. At times I absolutely loved this book. Then there were times I got bored and set my reader down in favor of watching prison shows on Netflix. At times it felt like I was reading three different books featuring the same characters in each book.

The beginning I found funny. There was a vampire who was trying so hard to be scary it was comical. When John gave in, he gave in fast. The tone shifted to more of a contemporary romance kind of vibe. I was down for it. I like my romance any way I can get it. But after reading a little more, BAM! tone shift to the dark, thriller aspect I had expected since the beginning of the book.

I understand the curse, the spell Richard preformed between John and Felix changed John but, I didn’t like how rushed those last chapters felt. I feel like I missed a few chapters. I didn’t. I checked.

I don’t think I ever met characters like John, Felix, or Lo. They were unique and I loved them. Lo kicked ass and had a mine like my own. Felix I adored. He made me laugh, hide from second-hand embarrassment, and how sweet he became with John made my heart melt. John, I related to him and his predetermined fate with his curse. Sometimes, with a chronic illness, I think why bother? John did this A LOT and I could completely understand that. John found a reason why he should bother in Felix.

So I was on the fence with this one and will give the author another go if I see something by her but I’m not rushing out to the store.