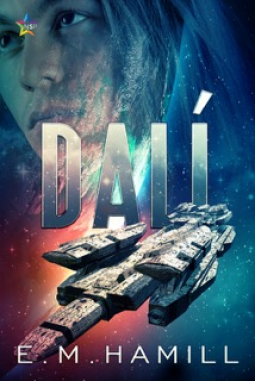 Four Stars out of Five

Summary: Dalí Tamareia has everything—a young family and a promising career as an Ambassador in the Sol Fed Diplomatic Corps. Dalí’s path as a peacemaker seems clear, but when their loved ones are killed in a terrorist attack, grief sends the genderfluid changeling into a spiral of self-destruction.

Fragile Sol Fed balances on the brink of war with a plundering alien race. Their skills with galactic relations are desperately needed to broker a protective alliance, but in mourning, Dalí no longer cares, seeking oblivion at the bottom of a bottle, in the arms of a faceless lover, or at the end of a knife.

The New Puritan Movement is rising to power within the government, preaching strict genetic counseling and galactic isolation to ensure survival of the endangered human race. Third gender citizens like Dalí don’t fit the mold of this perfect plan, and the NPM will stop at nothing to make their vision become reality. When Dalí stumbles into a plot threatening changelings like them, a shadow organization called the Penumbra recruits them for a rescue mission full of danger, sex, and intrigue, giving Dalí purpose again.

Risky liaisons with a sexy, charismatic pirate lord could be Dalí’s undoing—and the only way to prevent another deadly act of domestic terrorism.

Dali by E.M. Hamill is a sci-fi adventure featuring Dali Tamareia, an empathetic, genderfluid changeling. The core of Dali’s story is about the third gender, which is neither male nor female but can change between both. Shifting their sexual organs, the timbre of their voice, and often times the changeling leans more towards male or female but Dali is different. Dali prefers the neutral.

As you read, you delve into political plots, different worlds and the views of the characters in these worlds. Dali had their flaws. After her family is torn apart in a terrorist attack, Dali spirals into risking their life. In the process they encounter a situation involving other third gender beings being kidnapped and sold on the market to the highest bidder. Dali finds themselves needing to find a way to save those who had been kidnapped and sold.

Dali meets Rhix, who even though he’s the villain, I couldn’t help but like him and understand why Dali was charmed by him. He wasn’t disgusted by Dali’s nature. He wanted to learn more. In Dali’s interactions with Rhix they reverted to the female form. It was a major point in the storyline and the scenes with the two of them were full of delicious sexual tension. I think the detail taken to explain Dali and their body, how they felt and the empathetic feelings in those moments, made those scenes quite steamy.

The only downside to this was the elaborate terminology that you had to learn. There was such a diverse cast, it got a little difficult to keep up with the different species and abilities that each had. As soon as I finished reading the novel I found the dictionary at the back. So sneak a peek at that if you are having issues with the terminology. It was a little slow in the beginning but overall I enjoyed the read. I loved not only the main characters but the secondary characters. Also the fact that there were a lot of Princess Bride references and codes use, it made it fun.

Would I recommend this to others? If they’re Sci-Fi fans and love elaborate worlds. This is a book for them!