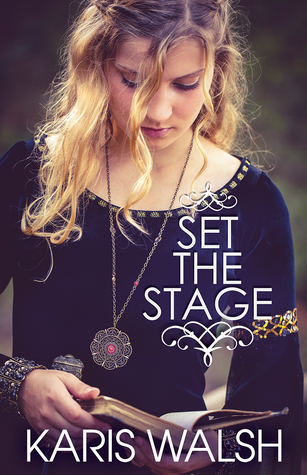 Summary: Emilie Danvers wins a place in the Oregon Shakespeare Festival’s company and gets a second chance to launch her acting career. She’s vowed never to repeat the mistakes she made the first time: no following her heart, no putting herself second to someone else, no relationship drama. She won’t let any woman keep her from reconnecting with her dreams.

Arden Philips has stood on the outskirts of the festival for years, tending the gardens of nearby Lithia Park. She’s seen actresses come and go and only allows herself the occasional dalliance. But when she comes across Emilie rehearsing on a mossy riverbank, Arden realizes her heart might not listen to her head.

The stage is set, the house lights dimmed. Is true love merely make-believe or can these two women write it into the script of their lives?

Set the Stage by Karis Walsh is a romance is set to the backdrop of the Oregon Shakespeare Festival. Emilie is returning to acting and Arden works as a groundskeeper at a nearby park. The two women have both had trouble with relationships in the past and are resolved to not face those issues this festival season.

The beginning was a little slow but after the first four chapters of establishing who Emilie and Arden are, the pace picks up and it was easy to get lost in Walsh’s writing. The way she wrote each setting, it made the park or the stages just as important as the characters she was writing about. There were times when she wrote of Emilie portraying different roles and it felt like I was right there watching Emilie as she recited her lines.

I enjoyed they slow burn of attraction that steadily grew more intense between Emilie and Arden.  They were friends first and then that blossomed into something more. It was fun reading about their walks, Emilie running lines and encouraging Arden’s garden designs, and eventually their romance.

As a first time reader of Karis Walsh, she’s definitely earned another fan.