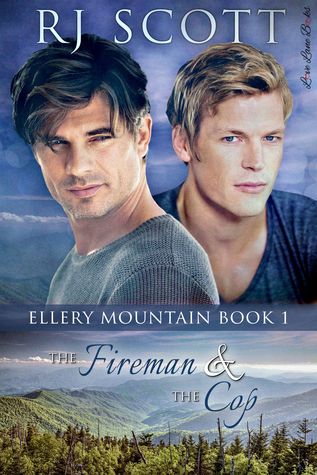 Summary: Rescuing a cop from a burning precinct is in Max’s job description; falling in love was never part of the deal.

Max Harrison moved from the city to take up a role as assistant to the mayor, while also a volunteer firefighter. When he meets Finn Ryan in Ellery, he falls in lust that burns as hot as the fires an arsonist is setting in town.

Finn Ryan is a cop, and somehow he’s attracted trouble. Going back into a fire to rescue the town drunk is just the start. Now he has to rely on the man he’s falling for to make sure it doesn’t end with him dying.

The Fireman and the Cop by RJ Scott takes place in the quiet, quaint town of Ellery with a backdrop of mountains, streams and wildlife. Finn Ryan is a local cop who hasn’t seen much in the way of crime other than a fireworks prank gone bad. Max Harrison has made the move from the city to a small town in search of a new start as both assistant to the mayor and a volunteer firefights.

A cop and a firefighter, how yummy can this get?

Their attraction to each other was instantaneous and white hot. Even dealing with smoke inhalation and getting loaded onto an ambulance, Finn hits on Max and it’s hilarious. It had me laughing. I have personally said embarrassing things while in pain and under the influence of medication so I could relate to that so well. So believe it, it really does happen. I think I even told a nurse after surgery she was beautiful and the world needed to appreciate that.

Even though poor Finn took a beating and ended up in a terrible situation, Max was there for him through and through. I liked that Max didn’t get scared off with everything happening in Ellery and so soon after his arrival!

Do I wish this was longer? Yes. But I always hope for a never ending book by RJ Scott. I love everything she writes. I read this in one sitting and it left me happy and in a much better mood than I had been when I first started reading it. So if you’re looking for a light, quick read, definitely give this a go!

*I read the May 10, 2017 version which had been re-edited and had additional scenes added to it.  The original publication date was in February 2013