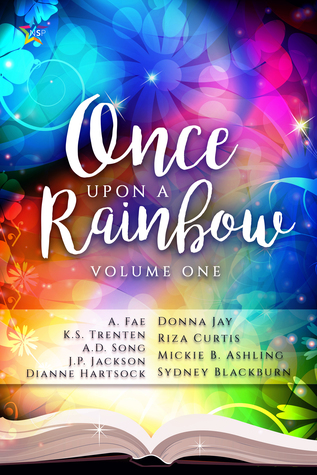 Summary: Your favorite stories from childhood have a new twist. Nine fairy tales of old with characters across the LGBTQIA+ spectrum.

Fairest by K.S. Trenten – What will you change into?

Gingerbread by Riza Curtis – A night out to die for.

Sleeping Beauty by A. Fae – United by true love’s kiss.

Little Match Girl by Dianne Hartsock – Falling in love with the Little Match Girl was easy, but now Christian is determined to help Dani find his family, even if doing so means he might lose him forever.

Hood’s Ride is Red by J.P. Jackson – A red car, a werewolf, and a trip to grandpa’s house – this ain’t your usual Little Red Riding Hood.

The Gingerbread Woman by Donna Jay – When Candace sets out for a weekend of solitude she gets far more than she bargained on.

White Roses by A.D. Song – A kiss to break the curse…or continue it.

Once Upon a Mattress by Mickie B. Ashling – Will Errol spend a miserable night and prove his worthiness or will Sebastian have to keep on looking?

Once Upon A Rainbow is a collection of reimagined fairy tales with a LGBTQ+ twist. Each tale has a new, excited element fused into it. Almost every time I was wishing there was more fairy tales to read by the time I got to the end.

I’m going to give you a bit of a breakdown of all the fairy tales.

Morningstar by Sydney Blackburn is a M/M tale. It immediately brings you into another word. One of magic perfume bottles, wishes and jinnis. Tariq is desperately in love with the man he’s apprenticed to, Malik. He would do anything to make Malik happy, including giving up his five wishes. As the tale progresses and with the help of Ridha, the jinni, Tariq has his eyes opened. Ridha offers Tariq an entirely different prospect of how to live his life.  Morningstar is full of rich, descriptive imagery and the exploration of emotion.

Fairest by K S Trenton is a F/F tale. I was amazed by the fact someone thought to combine Snow White and Sleeping Beauty. Why hadn’t I thought of this possibility before? There were dwarves, magic mirrors, cursed apples, witches and curses abound. What isn’t there to like about it? Rose was such a great character too. She had her own thoughts, beliefs and didn’t let the past and the beliefs of her family become hers. She came to her own conclusion and she loved based on how she felt right.

Gingerbread by Riza Curtis is one of my absolute favorites of this collection.  It’s a M/M, paranormal crime procedural. Noah and Erik are working to find some kind of answer in a case they’re working involving missing men. They  end up going undercover in an exclusive gay club. During this time they’re pretending to be boyfriends. (I absolutely love this BTW) As the case goes on, their feelings intensify. Erik worried Noah would react badly to him being a werewolf.  I love that so many different supernatural creatures were including in this and normalized. As I read I could see this playing out like a movie in my head.

Sleeping Beauty by A. Fae is hard for me to categorize because I’m afraid I won’t do it correctly. There’s Princess Talia who is intersexed and decides to undergo surgery upon her 18th birthday to become female. There’s Prince Sebastian who wants to do the same upon his birthday, to undergo a procedure as well. As Talia undergoes the procedure this is where the Sleeping Beauty bit comes in. What I found really neat about this was the fact that this does happen in real life. People don’t always wake up from surgery. There might not be anything wrong with them but they don’t wake up. I loved how much these girls supported each other and loved each other. This was another one that I want to read more of. I feel like there is so much more to their story! It left me smiling and happy.

Little Match Girl by Dianne Hartsock is a M/M tale. Christian and Dani are such a great couple. Christian takes care of Dani, who ends up homeless in order to escape an abusive father. Christian never sees Dani as homeless, he just sees Dani. I found the way Hartsock wrote that beautiful. There were some steamy scenes in this one. *fans self*

Hood’s Ride is Red by J. P Jackson is a M/M werewolf tale. Holy smokes. I probably live texted this one to my friend while I was reading at work. Harkin Ross aka Hood is in jail for a horrendous crime he didn’t commit. The worst part of it? He was outed as a werewolf and now reporters, the government, everyone wants a piece of him while he just wants to know the truth of what happened. Kenneth, who had been by Hood’s side for a few years, finds a way to rescue and tell Hood the truth. There was something about the format of how this story was told that drew me in. If felt almost like a documentary. I can still see Hood sitting across the table bartering with a reporter to get candy and anything to make being in prison a little bit better.  The entire time reading, I was excited for what was to come. This one was awesome!

The Gingerbread Woman by Donna Jay was a brief, steamy and pure fantasy F/F.

White Roses by A. D. Song was a F/F take on Sleeping Beauty. If felt very true in attitude of how men would have acted towards women. I liked seeing that another woman drew Iliana out of her shell. It was fun seeing them practicing with swords against each other. It got a little gruesome towards one point but never fear, happily ever after can happen even after the worst of scenarios.

Once Upon a Mattress by Mickie B Ashling, was the perfect note to close out the book with. It is a M/M take on the Princess and the Pea.  Sebastian is royalty trying to find a husband and someone who will carry his child to keep the throne secure for his family. Errol is one of the commoners who get an invitation to the masquerade to help Sebastian secure a husband. I might have melted a bit with the fact that Errol is from the Shetlands, I could hear his accent and he wore a kilt.  I really would have loved to read so much more about these two. There was a push and pull between the two of them that kept me reading, made me see and laugh at some of their responses to each other. This was an excellent read and one of my other favorites in the book.