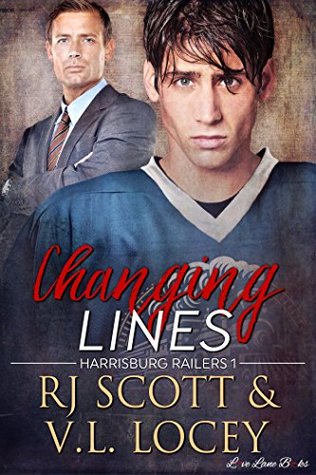 This is book one in the Harrisburg Railers Series

Can Tennant show Jared that age is just a number, and that love is all that matters?

The Rowe Brothers are famous hockey hotshots, but as the youngest of the trio, Tennant has always had to play against his brothers’ reputations. To get out of their shadows, and against their advice, he accepts a trade to the Harrisburg Railers, where he runs into Jared Madsen. Mads is an old family friend and his brother’s one-time teammate. Mads is Tennant’s new coach. And Mads is the sexiest thing he’s ever laid eyes on.

Jared Madsen’s hockey career was cut short by a fault in his heart, but coaching keeps him close to the game. When Ten is traded to the team, his carefully organized world is thrown into chaos. Nine years his junior and his best friend’s brother, he knows Ten is strictly off-limits, but as soon as he sees Ten’s moves, on and off the ice, he knows that his heart could get him into trouble again.

I have to preface this review by being honest. I typically love everything by bot V.L. Locey and R.J. Scott. So if I get a little flowery, excuse me. I try to be as objective as necessary but they are on my one-click author list. I’m a little obsessed with hockey as well.

Changing Lines is the first book in a hockey centered series by R.J Scott and V.L Locey. Ten is a much younger hockey player who is attracted to Mads, an old family friend who also happens to be Ten’s new coach. This is definitely what I would consider a vacation read. It’s a light, easy and happy read. It wasn’t overly complicated and it had all the aspects of a romance novel that we all love.

Saying that, there were parts of the plot I wish would have been explored more. With all the emphasis that had been put on a ‘slow’ moving relationship, all the development happened off screen. I was hoping for a drawn out, steamy, story line. It felt a bit rushed and they just needed to get together right now because the reader won’t stick around if they don’t!

Also, in the summary there was mention about the age difference between Mads and Ten but it was a plot point briefly explored. I expected angst and both men having to fight a little more to get what they wanted. One of the only things that reminded me that Mads was older was his son*.

I did love the interaction between all the Rowe brothers. They are a hockey family through and through, and the dynamic instantly made me think of the Staal brothers. There are a lot of brothers in the NHL and it was exciting to see that shown in a M/M romance. I liked that the family of hockey was as important as if seems to be in real life. If you aren’t a hockey fan, you should still give this a read if you like sports romance.

*If I recall correctly we are getting a New Adult novel featuring Mads’ son. I’m beyond excited about this.